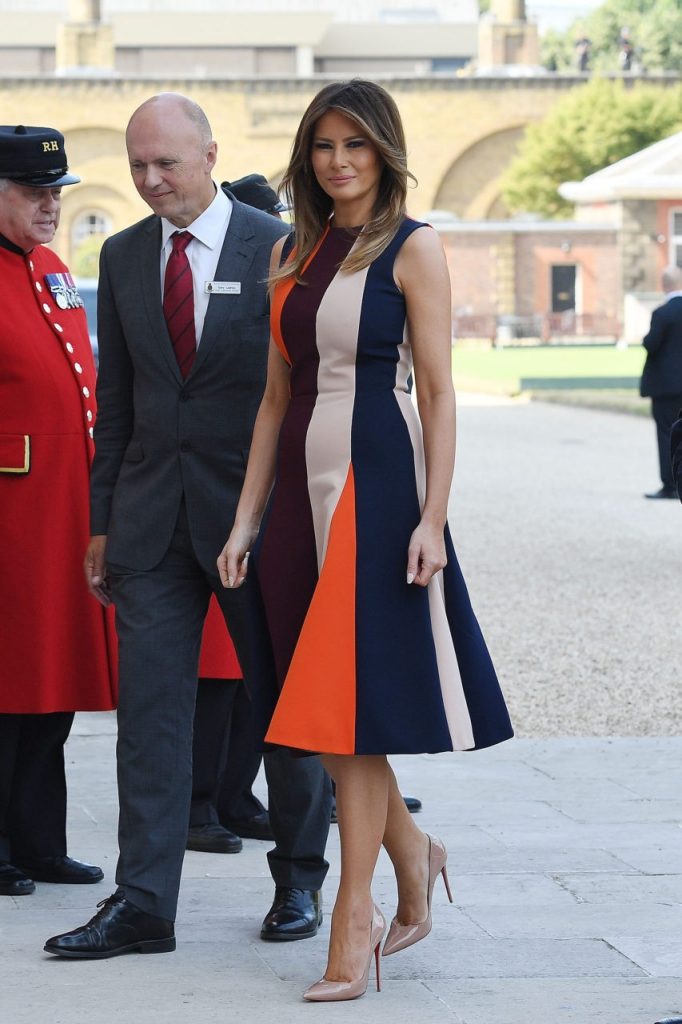 Melania spiced up her life with this outfit Friday morning!

Visiting the Royal Hospital Chelsea in London to meet the Chelsea Pensioners (British Army veterans) and local schoolchildren, First Lady Melania Trump wore a colorful midi dress designed by British designer Victoria Beckham. The navy, beige, burgundy and orange color-blocked sleeveless is a fit-and-flare dress that is super flattering and a favorite of the First Lady. She paired the beautiful flared dress with taupe Christian Louboutin. 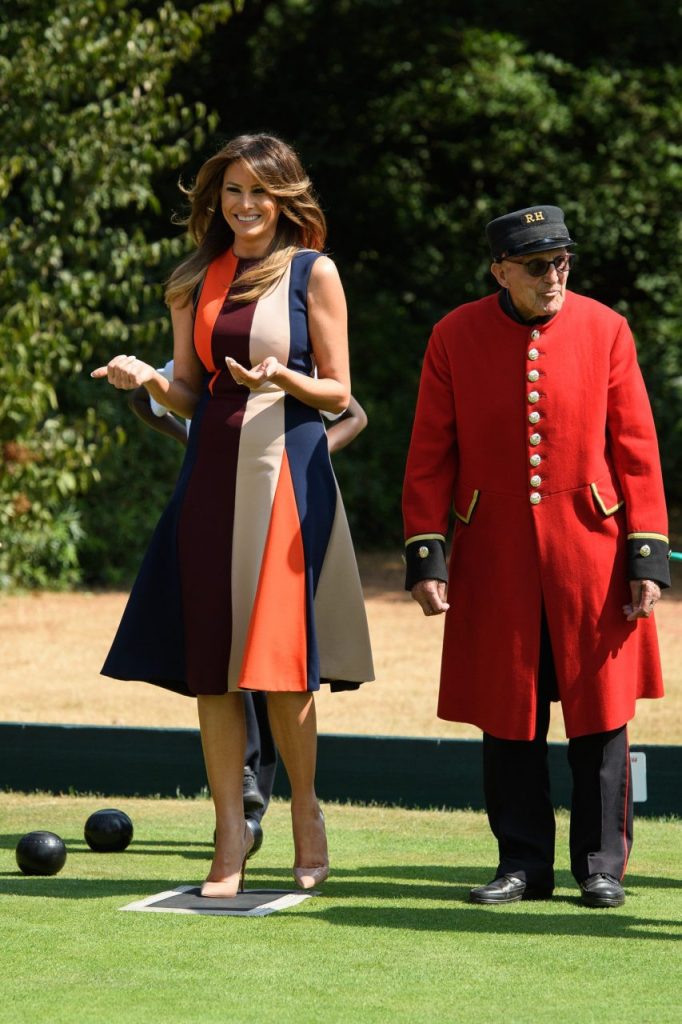 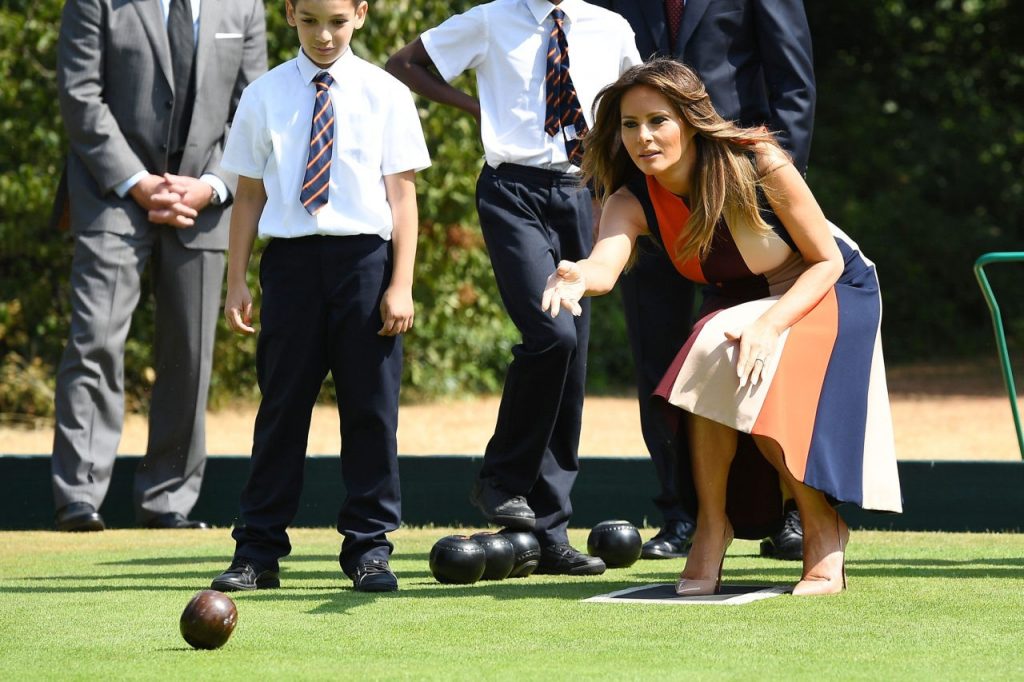 During her visit, Melania, joined Philip May, the husband of British Prime Minister Theresa May and played a game of bowls on the green with the schoolchildren, as well as assemble Remembrance Day poppies with veterans. Despite her stilettos choice, Melania was able to take part in the game, enjoying herself and having fun with local children in a classic British game. 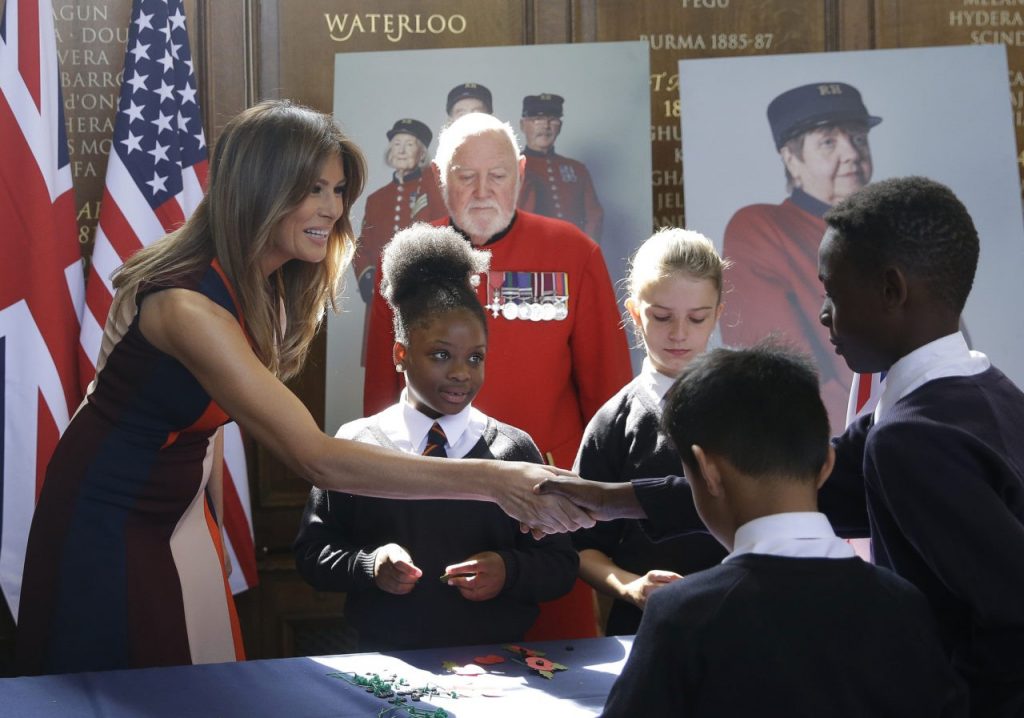 Continuing the practice of fashion diplomacy, this outfit was another tribute to the British fashion. When arriving to the UK for a four-day visit, Melania wore a Roland Mouret beige dress, a British-based label and a favorite designer of Duchess of Sussex Meghan Markle. Although she was not officially dressed by Beckham, the former Spice Girl singer turned famous designer said before that she no problem with the first lady wearing her designs.

“I just think if any woman chooses to wear me, or invest in me as a designer, that’s incredibly flattering,” Beckham said at the Vogue’s Forces of Fashion last October. “I like to make everybody happy, and whoever it is, if they want to wear my clothes and I can make that happen, and the sample is free, then I would jump at the opportunity to do that.”

After the hospital visit, Melania will join her husband, President Donald Trump and make their way to Windsor Castle, where they will have afternoon tea with Queen Elizabeth II, watch a military march and inspect the Guard of Honour.

What Melania Wore to the UK State Dinner

What Ivanka Wore Visiting US Military Base in Qatar

Ivanka Trump to Be Honored By National Association of Manufacturers

What Melania Wore to the UK State Dinner