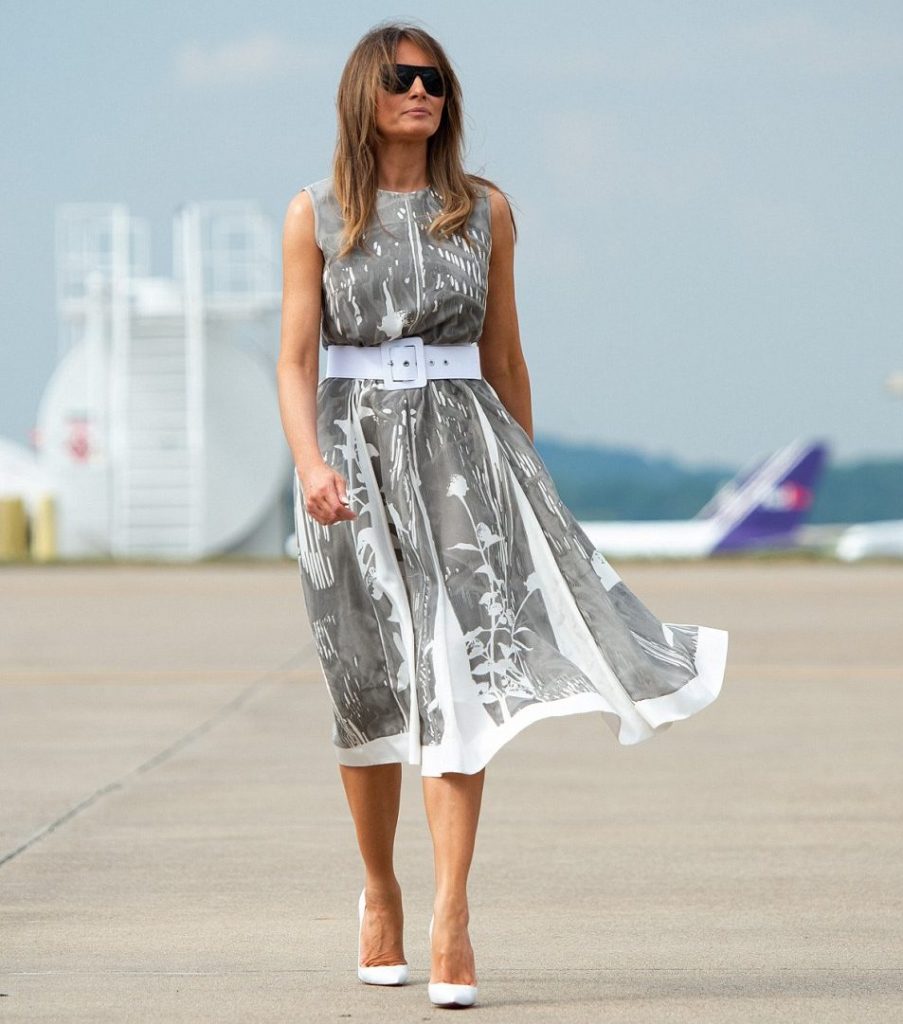 For this visit, Melania was seen wearing a Jil Sander silk midi tulip gray and white dress. She paired the sleeveless dress with a large white belt, giving the look more structure on the waist line and her signature stiletto — Christian Louboutin in white. The dress is from the designer 2017 Spring collection and retails for $2269. It is currently sold out. 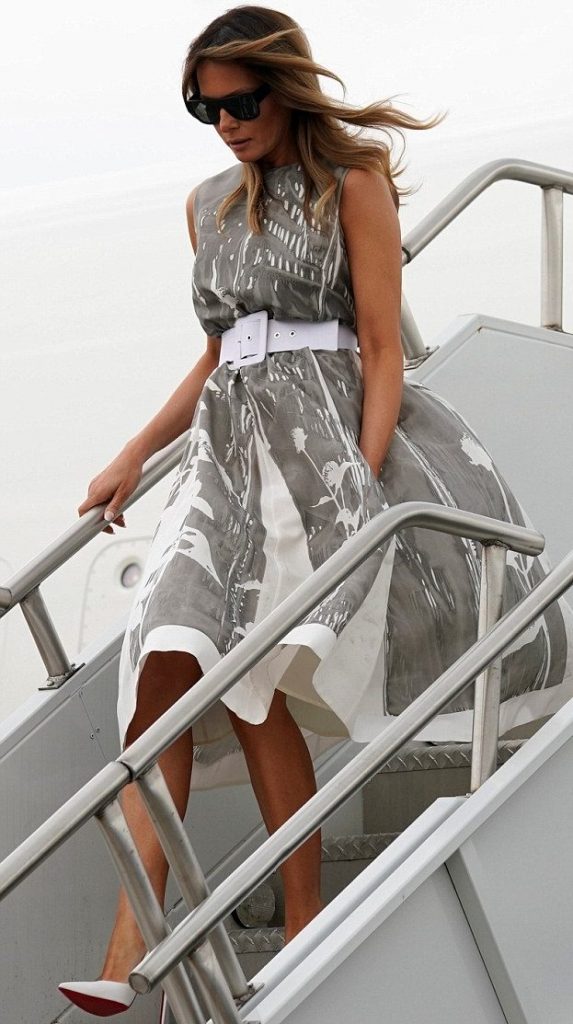 The first lady spent a few hours at the Monroe Carell Jr. Children’s Hospital at Vanderbilt, where she participated in a brief roundtable discussion about neonatal abstinence syndrome (NAS) with the hospital’s Chief of Staff Dr. Margaret Rush and Center for Child Health Policy Director Dr. Stephen Patrick regarding treatment options for infants of opioid-addicted mothers born in conditions of withdrawal. The program keeps mothers and babies together to improve outcomes. 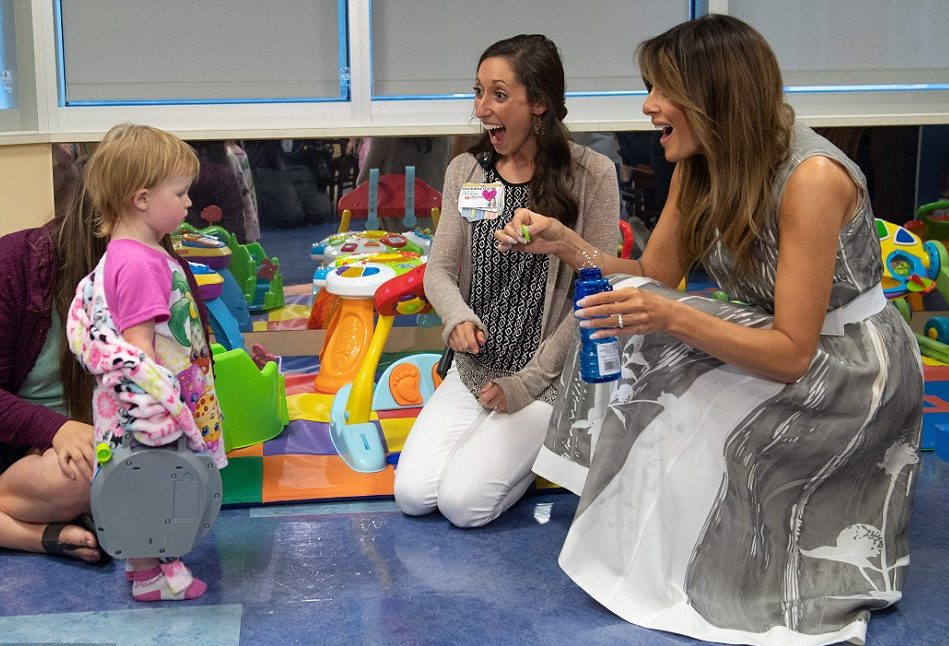 “My passion is to shine a light on the opioid crisis,” Melania told doctors and other staff at the Nashville hospital. “I want to continue to learn and believe in starting early to educate young mothers and children about the dangers of drugs. I believe the more we talk about this, the shame and guilt will go away.” 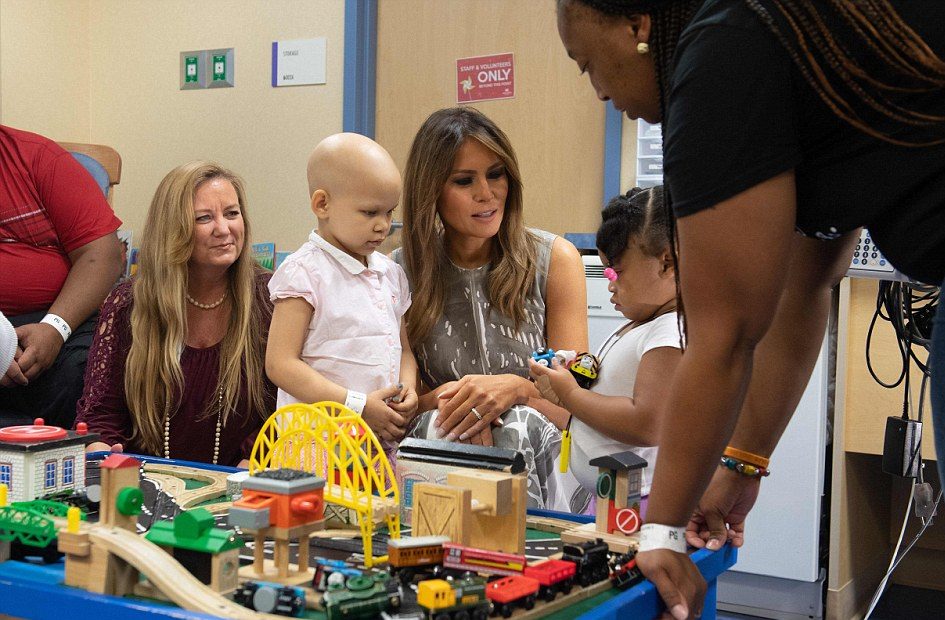 After the discussion, Melania privately met with families who have infants in the NICU diagnosed with NAS. She gifted the families a pink, blue and white fleece blankets with the White House seal embroidered in the corner. At the playroom, Melania blew bubbles with pediatric patients and played with the train toys. She shared a conversation with four-year-old Essence Overton in which both talked about their color of their manicure. 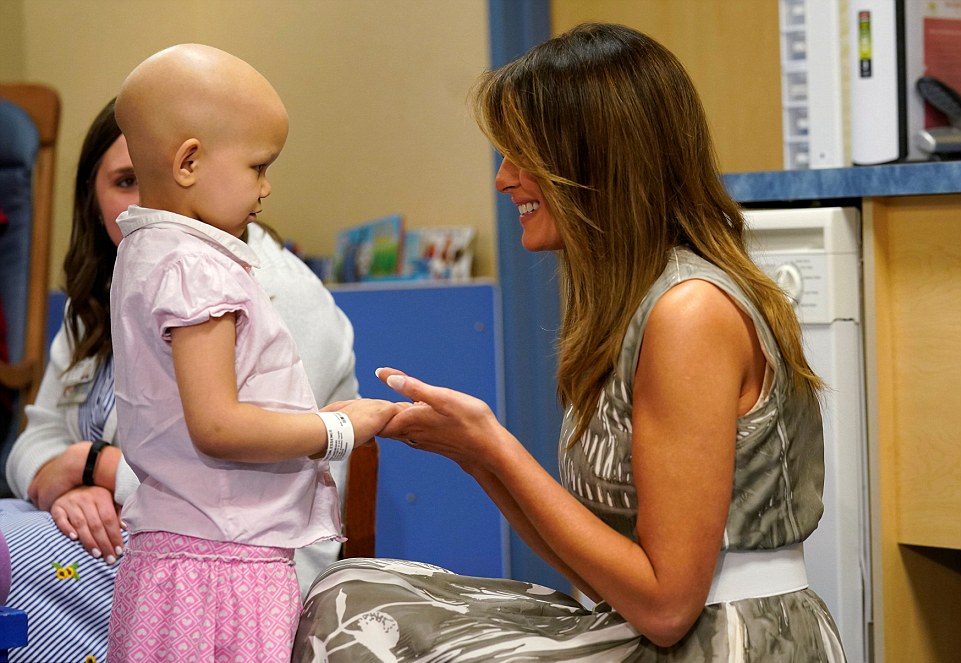 The visit was part of Trump’s new “Be Best” initiative, which will focus on child well-being, social media use and the consequences of the opioid addiction epidemic. Amid a national opioid crisis, Tennessee faces an epidemic of drug-dependent babies diagnosed with neonatal abstinence syndrome. As the state deals with a rising number of overdose deaths, babies born to addicted mothers are filling neonatal intensive care units in Tennessee faster than the health care system can treat them. The Tennessean reports the number of babies in withdrawal has increased tenfold from 1999 to 2010.

“Thank you to Vanderbilt University Medical Center and to the dedicated staff at Monroe Carell Jr. Children’s Hospital for hosting me today, and for sharing your important work and research on NAS,” Melania said in a statement after her visit.  “Through Be Best, I look forward to working with medical centers around the country in our effort to raise awareness and educate people on the real dangers of NAS.  I also want to thank the families and patients who have shared their personal stories on this difficult but important issue – it is through honest and real dialogue that we can remove the stigma of addiction and have a positive impact on those suffering from this condition.”

Grammys 2020 — The Best, The Worst and On the Fence! Dressed List