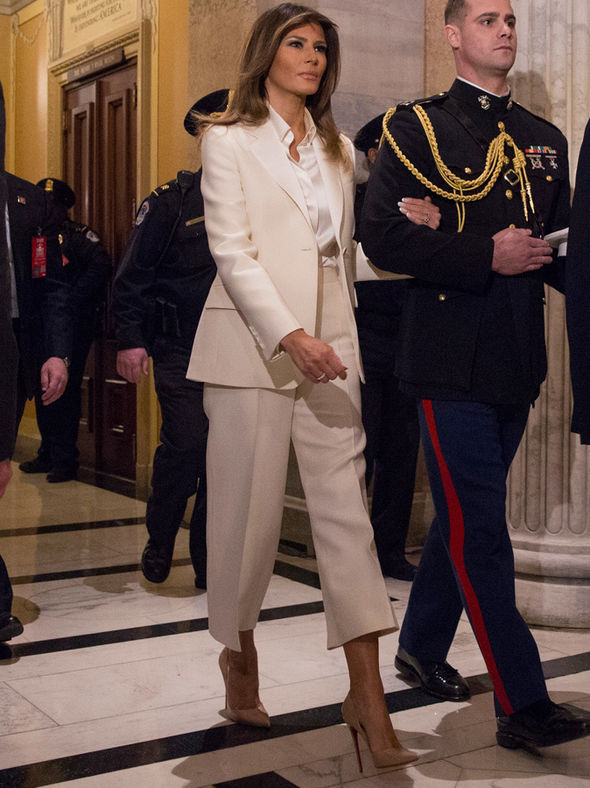 For her husband first State of the Union address to Congress on Tuesday, First Lady Melania Trump was dressed in head-to-toe white.

Looking stunning as she made an entrance to the chambers to watch her husband deliver his first State of the Union, social media noted her white suit represents a suffragist ensemble that dates back to the National Women’s Party who fought for women’s right to vote. It’s not clear whether Melania’s all-white ensemble was a political statement, or simply a sartorial choice, but her choice definitely stood out.

Amid a sea of women who wore black for the address, Melania dared to be different in the all white pantsuit that reflected the glare of the cameras, giving her a definite glow. It’s a look many women can’t pull off – the wide-legged, ankle-skimming pants, but the slim trousers suited the first lady perfectly.

Breaking away from longstanding tradition, Melania opted to ride with the guests she invited to share her first lady’s box to the Capitol. The first lady took her seat in a special box, between New Mexico police Officer Ryan Holets and 12-year-old Preston Sharp. Holets adopted the baby of an opioid-addicted mother, and Sharp organized an effort to place 40,000 flags and flowers at the graves of soldiers.

“In addition to holding a White House reception and photo opportunity for them, along with their friends and family, she is accompanying them to the Capitol,” First Lady’s Communication Director Stephanie Grisham said in a statement. “Once there, the first lady and Mrs. Pence will host a more intimate meet-and-greet to engage with them on a personal level prior to the speech.”

The special guests at the speech included two couples whose daughters were allegedly killed by Salvadoran gangsters on Long Island; an Ohio welder who was able to buy a first home due to tax reform; the founder of the Cajun Navy that aided Texans affected by Hurricane Harvey; and a Marine gravely wounded in Iraq in 2006 who recently re-enlisted, as the first blind, double-amputee to do so.

On Twitter, Melania indicated that she would indeed be attending the State of the Union address and would be sitting with “honorable group of Americans.”

I will be joined tonight by an honorable group of Americans. Sitting with me are heroes who have served our nation in times of need, families who have suffered at the hands of evil, and citizens who have embraced the American dream. #SOTU

What Melania Wore for the 2019 National Christmas Tree Lighting

Celebrating Ivanka’s Birthday Highlighting The Best of What Ivanka Wore