First Lady Melania Trump paid a surprise visit to a child detention center in South Texas on Thursday, but that visit became an afterthought as her fashion outfit quickly drew a media controversy.

Boarding Air Force Base in Maryland, Melania was pictured wearing a Zara military-inspired Khaki jacket with a phrase ‘I REALLY DON’T CARE, DO U?’ across the back section in white graffiti-style writing. Melania removed the jacket when landing in Texas and was seen wearing a cream button-up safari-style jacket, paired with white jeans and Adidas Stan Smith sneakers.

However, DailyMail.com was first to identify the $39 Zara jacket that is now sadly sold out and people quickly took to Twitter to slam the first lady as she was touring the facility for being insensitive. 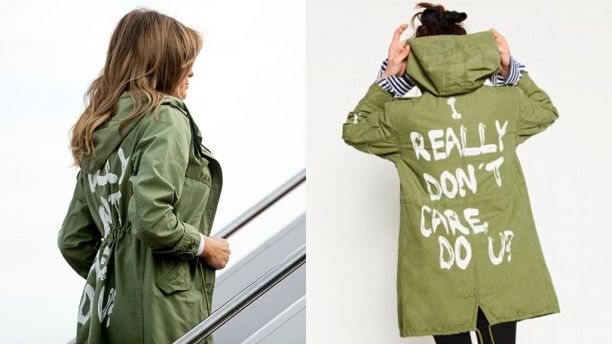 Another slam from the media of her visit to Texas pointed out Melania was wearing what is dubbed as “fast fashion,”  a relatively affordable item from Zara. The media were quick to say her outfit choice is unusual for the First Lady, who typically wears luxury designer clothing. 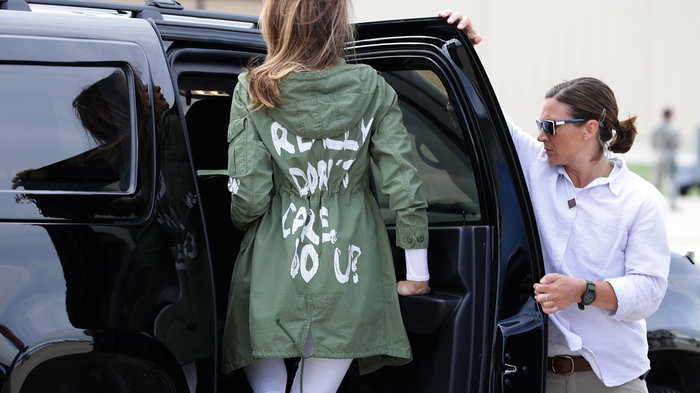 When asked about the jacket, FLOTUS communications director Stephanie Grisham responded to the backlash in a statement: “It’s a jacket. There was no hidden message. After today’s important visit to Texas, I hope the media isn’t going to choose to focus on her wardrobe. Much like her high heels last year.”

On Twitter, Grisham added to her official statement, saying “If media would spend their time & energy on her actions & efforts to help kids – rather than speculate & focus on her wardrobe – we could get so much accomplished on behalf of children”

Today’s visit w the children in Texas impacted @flotus greatly. If media would spend their time & energy on her actions & efforts to help kids – rather than speculate & focus on her wardrobe – we could get so much accomplished on behalf of children. #SheCares #ItsJustAJacket

Later in the afternoon, Melania’s husband, President Donald Trump tweeted about the jacket’s message, saying the statement was referring to the “Fake News Media.”

“I REALLY DON’T CARE, DO U?” written on the back of Melania’s jacket, refers to the Fake News Media. Melania has learned how dishonest they are, and she truly no longer cares!

[…] to wear a casual camo Zara jacket with a with message written on the back reading, “I REALLY DON’T CARE, DO U?” during her trip to McAllen, Texas, to visit a migrant children’s shelter. Melania […]