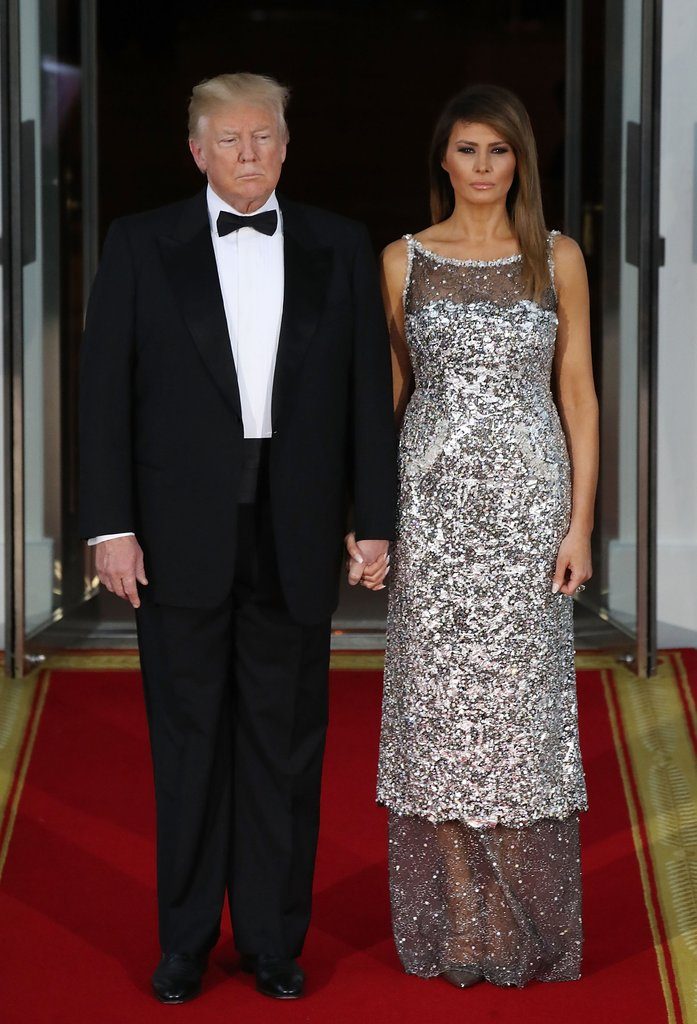 In head to toe glitter, the First Lady wore a custom-fitted Chanel couture gown that featured embroidered sparkling crystals and a sheer back Chantilly lace around her neckline and around the lower part of the dress hem that covered her heels. She matched the gorgeous embellished dress with shining silver Christian Louboutin pumps. 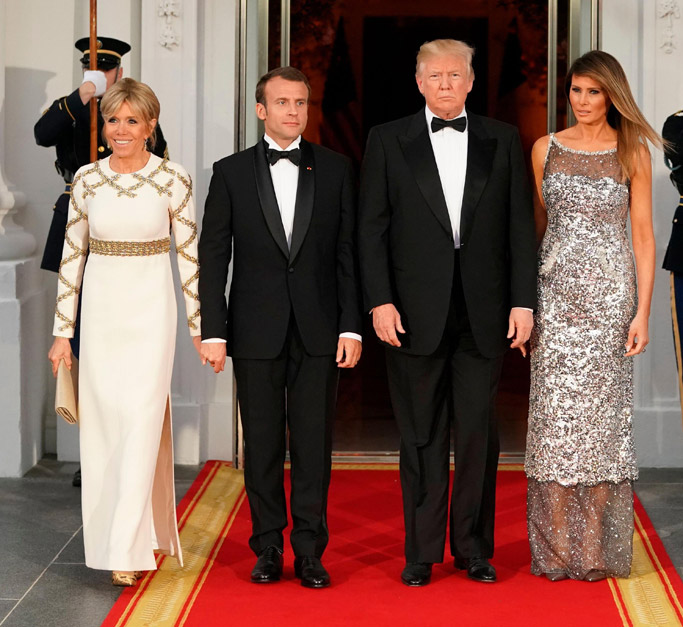 The dress, according to Glamour appeared to be an altered variation of a silver sequined Chanel jumpsuit from its Spring 2018 couture collection that appeared during Paris Fashion Week in January. Melania requested the jumpsuit to maintain the same mesh neckline, crystal embellishment and contrasting sheer hem, but wanted to change the pants to a floor-grazing sequin skirt. 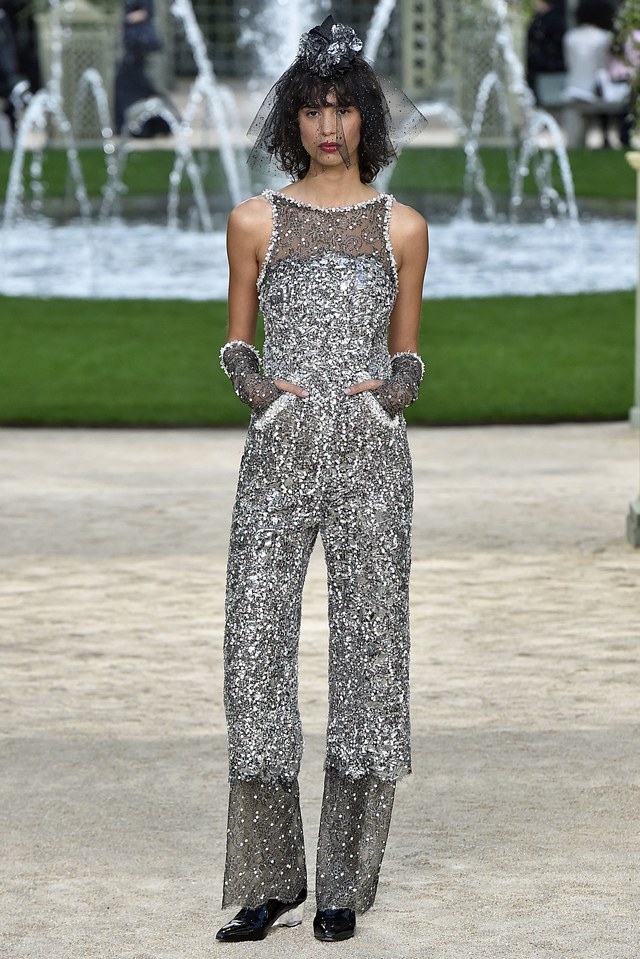 France’s First Lady Brigette Macron also chose to wear a floor-length gown. The white gown was a custom made, from her all-time favorite designer, Louis Vuitton. The chic long-sleeved dress featured a detailed gold and silver brocade design around her collar and sleeves, channeling a Grecian look and had a side-high slit on the left side. As for her shoes, she coordinated it to match the details of her dress, wearing gold pumps that were visible on the side due to the revealed high slit. 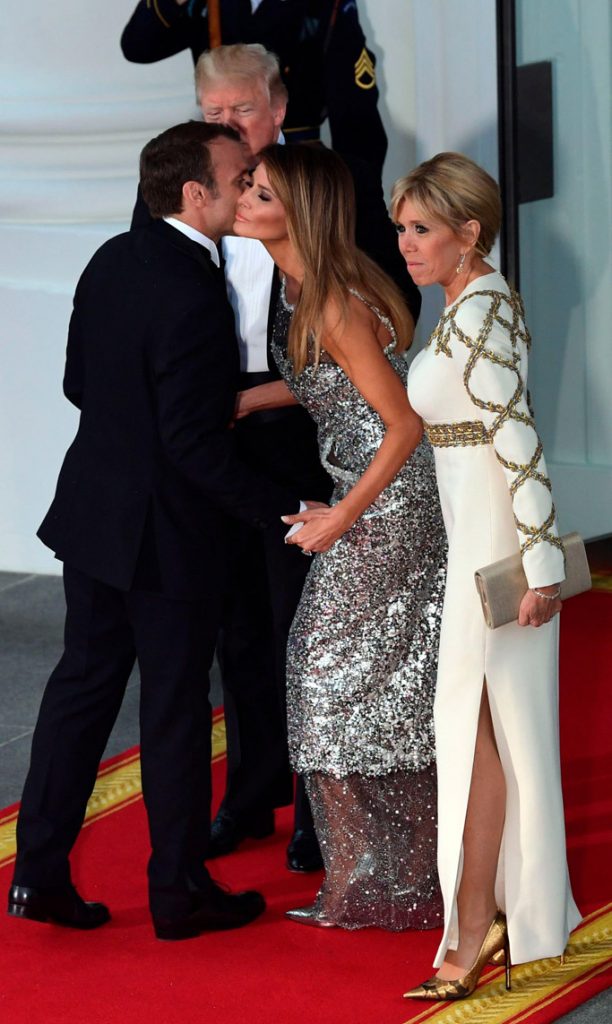 The Trump hosted the Macrons for a two-day official state visit that included a tree planting on the White House South Lawn, dinner at George Washington’s Mount Vernon, and a joint news conference. The state dinner was the first for the Trumps, having an intimate gathering of 150 guests in the State Dining Room. 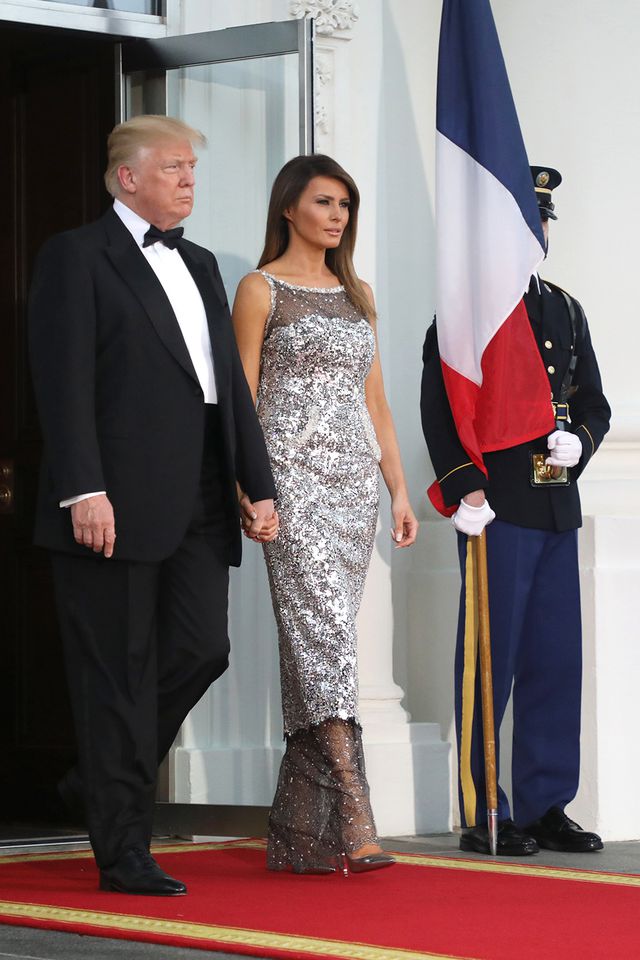 First Daughter Ivanka Trump, and her husband Jared Kushner, were among the first to arrive to the event with Ivanka wearing a pink polka-dotted tulle Rodarte gown that retailed for $13,686. 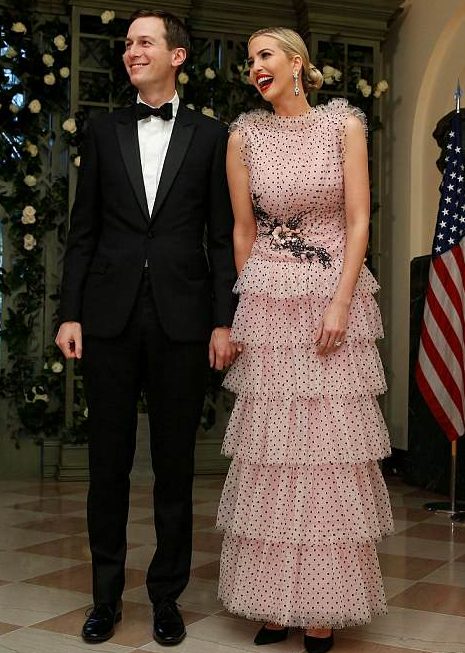 Other guest included Apple’s Tim Cook, Rupert Murdoch and his wife Jerry Hall, LVMH’s Bernard Arnault and his wife Hélène, Secretary of Commerce Wilbur Ross and his wife Hilary, IMF’s Christine Lagarde, Treasury Secretary Steven Mnuchin and his wife Louise, and former Secretary of State Henry Kissinger and his wife Nancy. The decor of the state dining room was all gold from the table setting, silverware, candlesticks, wine glasses, and chairs — all “carefully selected” by Melania. On Monday, Melania tweeted out several photos showing the last-minute preparations and the “final details,” she was making for her first state dinner.

Spent yesterday with my team checking on the final details of our first State Dinner with France. pic.twitter.com/vHoQ1rTA3s

What Melania Wore At The State Arrival Ceremony

Golden Globes 2020 — The Best, The Worst and WTF! Dressed List

What Ivanka Wore to the Scrubbed SpaceX Rocket Launch

What Melania Wore Welcoming Members of U.S. Special Olympics to the WH

What Melania Wore At The State Arrival Ceremony