First Lady Melania Trump joining her husband President Donald Trump in the White House Monday afternoon for a moment of silence for the victims of the Las Vegas shooting, and ordered the flag flown at half-staff in mourning.

Melania was spotted in a fit-and-flare tweed dress from Alexander McQueen. The dress, going for $2,995 is known as the “Wishing Tree” is a multicolor tweed with frayed edges that boasted plenty of trendy details from a distressed hem to rainbow thread referred to as the “Wishing Tree” fabric.

The First Lady finished off the look with a pair of Christian Louboutin stilettos in a dusty yellow suede. 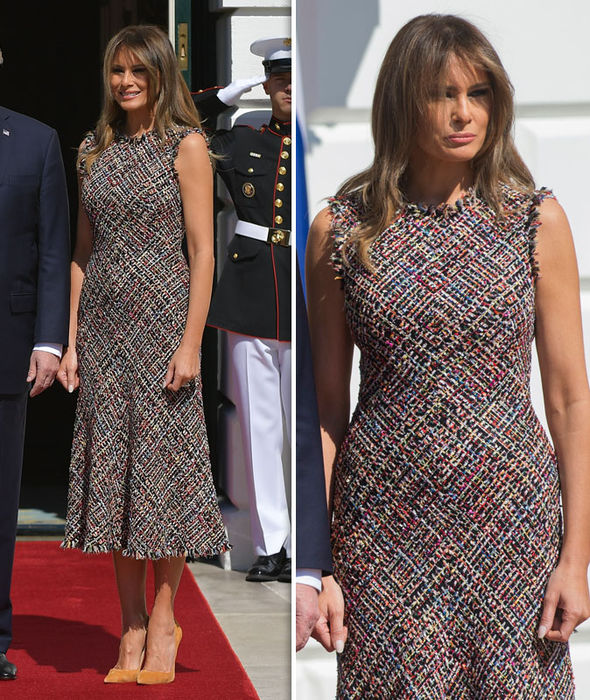 Before the moment of silence, Melania shared her condolences with the victims of the Las Vegas mass shooting in a tweet Monday.

My heart and prayers goes out to victims, families & loved ones! #PrayForLasVegas

“My heart and prayers goes out to victims, families & loved ones!” Trump wrote.

As of Monday evening, 59 were confirmed dead and 527 injured at the hands of gunman Stephen Paddock in the worst shooting in modern US history after he opened fire from the Mandalay Bay hotel in Las Vegas onto country music festival-goers

Celebrating Melania’s Birthday with 50 Best of What Melania Wore

What Melania Wore Arriving to India

What Melania Wore To Her Solo 2020 Campaign Event