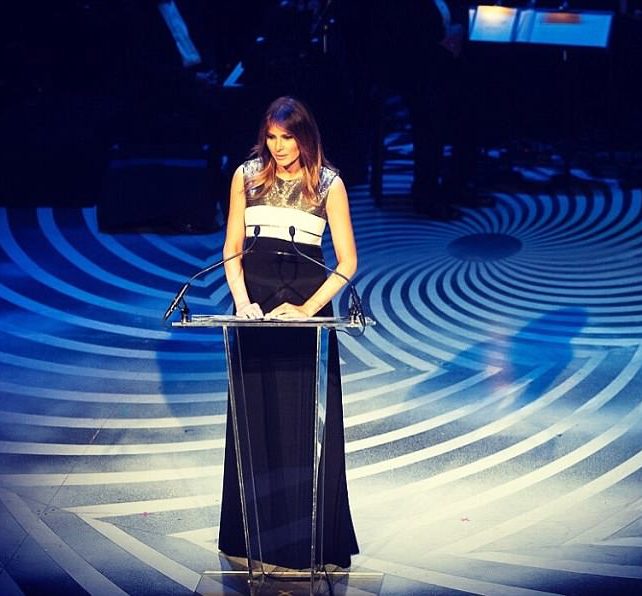 First Lady Melania Trump has been out the spotlight for the past three weeks, recovering from a kidney procedure, but she has made a dazzling comeback this past week in a floor-length gown.

Attending a gala at the Ford’s Theater Sunday night solo, as her husband headed to Singapore for a highly anticipated summit with North Korean leader Kim Jong Un, Melania wore floor-length tri-color gown in black, with white and gold neckline by the German luxury fashion house Escada. The Escada strapless metallic halter neck gown retailed for $4,595 and is currently on sale for $2,757 at Saks Fifth Avenue.

There was no advance announcement of Melania schedule, so there were no media pictures of her appearance. However, she tweeted her appearance on FLOTUS Twitter account, where it showed from the pictures the Escada column gown she wore.

The First Lady delivered remarks at the end of the gala, thanking Ford’s Theatre and the performers for a wonderful evening. She congratulated the recipients of this year’s Lincoln Medal – an annual award given to people who have exemplified the legacy of President Lincoln through their achievements and bodies of work.

“Tonight reminds all of us about the power the arts have in cultivating the American voice,” Melania said. “Thank you to Ford’s Theatre Society for tonight, and your continued dedication to education and leadership in the arts—the impact they have on society is invaluable and something we will continue to cherish throughout time.”

Thank you @Fordstheatre & the talented performers for a special evening celebrating the arts & the legacy of former President Lincoln. Congratulations to @jacknicklaus & Sheila Johnson, the recipients of the Lincoln Medal! pic.twitter.com/EEJLhLn5qb

Last year, Melania and the president appeared together at the event, with the first lady looking angelic in a champagne-colored Monique Lhuillier gown. 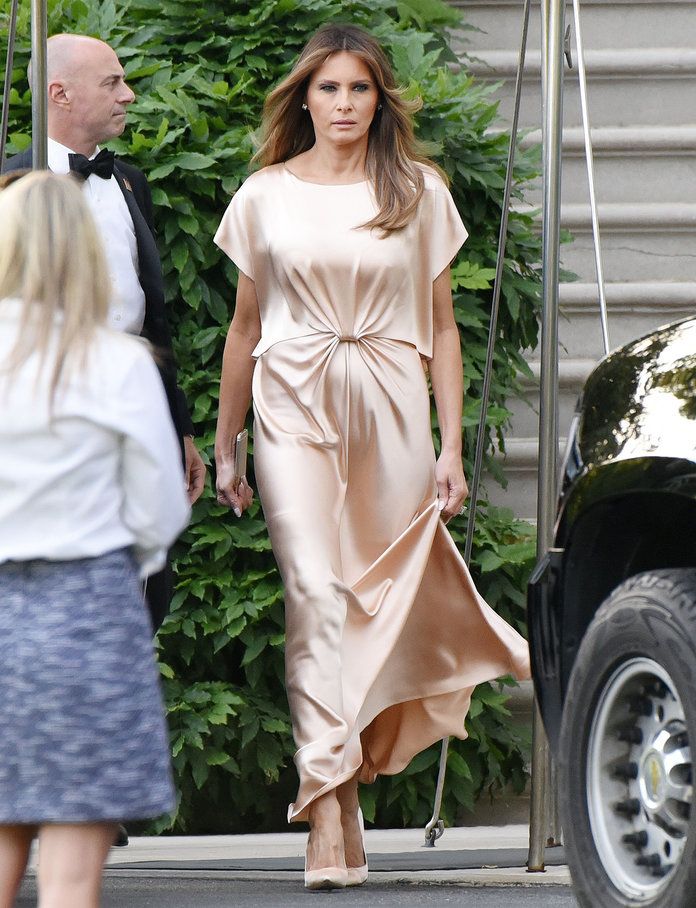 The president, before departing Friday to Singapore, told reporters the reason she couldn’t accompany her husband to Quebec or Singapore was due to doctor’s orders that told her she couldn’t “fly for a month.”

“She had a big operation, that was close to a four-hour operation,” he said before boarding Marine One en route to Quebec for the G7 Summit. “She wanted to go, but she can’t fly for one month.”

How To Tie A Bow Tie Video Format Post

What Melania Wore Touring the Basque region with G7 Spouses

How To Tie A Bow Tie Video Format Post