Melania stole the show with a fashion accessory that quickly became the talk of the town on Tuesday.

Officially welcoming the French President Emmanuel Macron and his wife, Brigitte, in a formal arrival ceremony in the White House Tuesday morning, First Lady Melania Trump wore a white skirt suit from Michael Kors. The crepe white blazer from the Michael Kors Spring 2018 Collection features an asymmetric hem and a thick faux leather belt. It retails for $2,195 on Net-A-Porter. She teamed the chic blazer with a double crepe pencil skirt from Micheal Kors. It retails for $995 and is completely sold out on Saks Fifth Avenue.

To top the all white suit skirt look, Melania paired it with the denim So Kate 120mm pumps by Christian Louboutin. The pumps retail for $775 at Neiman Marcus. 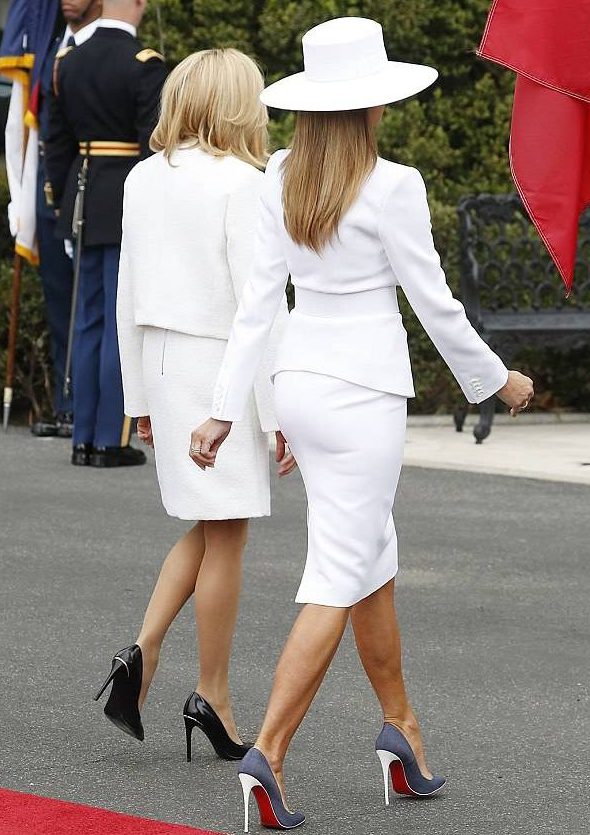 Melania completed the look with an attention grabbing wide-brimmed hat designed by French-American designer and Melania’s stylist, Hervé Pierre. Pierre told WWD that he made the hat from the same fabric used to for the Suit.

“They were so lovely,” Pierre said. “They gave me two yards of fabric and I had the hat made in an atelier in New York. It was a hatmaker with no brands. I did a mock-up with proportions and then it was done.”

The gorgeous, all white outfit was completed with a white hat would take the internet by storm with people making comparisons of Beyoncé’s look worn in her 2016 music video, “Formation” as well as Olivia Pope’s infamous white hat on “Scandal.”

It appeared that the first lady coordinated suits with Brigitte, who also worn a tailored white dress and jacket from Chanel.

After the ceremony, the women parted ways from their husband to take a guided tour of the National Gallery of Art.

What Melania Wore Welcoming The Macrons To The White House

What Ivanka Wore Trick-or-Treating With Family

What Melania Wore Returning to the White House From Summer Vacation

What Melania Wore Welcoming The Macrons To The White House