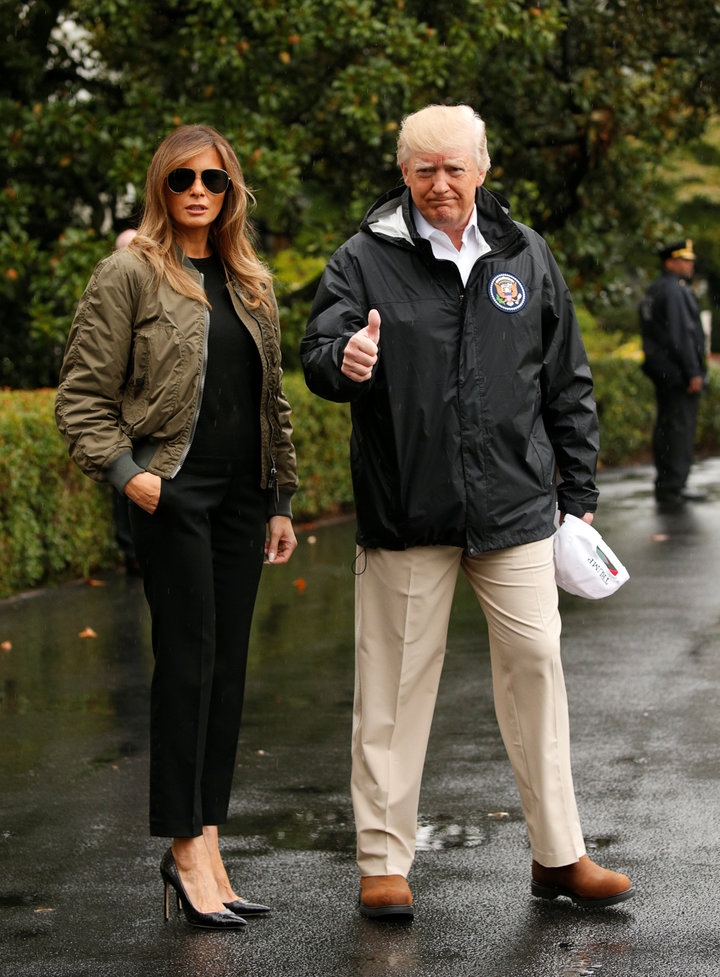 Social media and fashion critics erupted in a storm when First Lady Melania Trump wore stilettos when boarding Air Force One heading to Texas Tuesday afternoon, mocking her for her choice of footwear.
Heading to Air Force One Tuesday morning with her husband and President Donald Trump, Melania was seen, according to the White House pool report, wearing “black cigarette pants, Army green bomber jacket, aviator sunglasses, and high pumps.”
New York Times fashion critic Vanessa Friedman called Melania changed outfit to white Adidas sneakers, black pants and a white button-up shirt as a “suitable costume.”
“Women in the capital are generally more associated with sensible pumps than teetering patent leather numbers,” Friedman wrote. “This Mrs. Trump understands, which is why she changed into a more suitable costume (I use that word deliberately) for her arrival to Corpus Christi, Texas. The problem is that, as first lady, in a environment as fraught as the current one, there is no such thing as offstage.”
Other media reporters mocked the first lady. 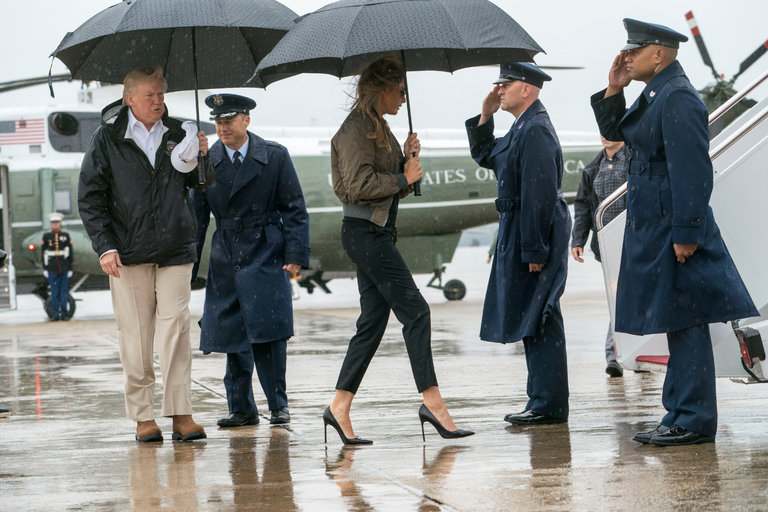 Washington Post fashion critic Robin Givhan wrote a 800-word essay, beginning it with: “Melania Trump is the kind of woman who travels to a flood-ravaged state in a pair of black snakeskin stilettos.”
Givhan continued, “Heels that high are not practical. But Trump is not the kind of woman who has to be practical. Heels this high are not comfortable. Comfort is not the point”
This implied statement makes no sense. Implying that heels are not practical to add that the first lady is “not the kind of woman who has to be practical,” shows the desperation of fashion critics to criticize Melania in every step that she takes, heels or no heels.
However, “The Daily Show” host Trevor Noah defended the first lady, telling these so-called fashion critics, “Like who cares?”
“I don’t know why anyone should care what anyone wears when they’re on their way to help people,” Noah said. “Like who cares?”
White House counselor Kellyanne Conway thinks people need to show the first lady  “some respect” calling the controversy “predictable” from feminists.
“We saw what was in the president’s and the first lady’s hearts that day, not what was on their feet,” Conway said on ‘Fox and Friends’. “It suggested to me that the Left is really very worried that the president is successfully showing leadership and compassion and empathy and resolve and action.”
Conway continued. “She can wear whatever she wants. This is what cracks me up about feminists … They get upset if you wear a pretty dress and somebody calls me ‘Honey.'”
Journalists were baffled by her shoe wear, but fail to mention that when the first lady landed in Texas, she had changed from her heels into sneakers. Masquerading as reporting, these so called “fashion” political journalists decide to shift the focus not related to Hurricane Harvey to attack the first lady fashion style.
In response to the critical reaction, Stephanie Grisham, Melania’s communications director, said the following statement via email: “It’s sad that we have an active and ongoing natural disaster in Texas, and people are worried about her shoes.” 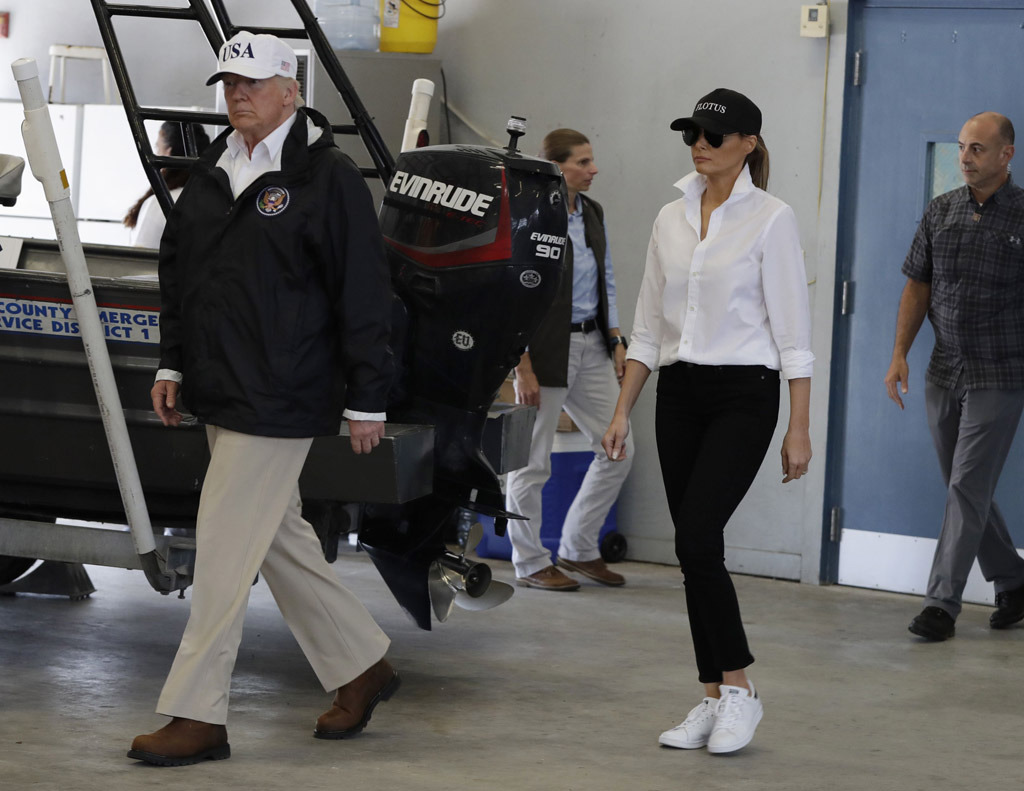 By the time Melania arrived in Texas three hours later, she completely changed her look,  trading her stilettos for Adidas sneakers, but she also ditched her fashion-forward bomber for a sporty and stylish white zip-up and tucked her hair into a black “FLOTUS” baseball cap.
It’s funny how most reporters can’t dress for the job they have, but can criticize a former model for what she wore en-route to Texas. Maybe these reporters should first look into a mirror and then take notes from Melania fashion sense. Just saying!

Update September 19, 2017
The designer of the world’s most famous heel weighed in on Melania’s choice of shoe wear.
“I don’t think she’s insensitive,” Blahnik said in an interview with Harper’s Bazaar UK. “I think she’s working nonstop to make it work — possibly she was just wearing the shoes she left New York in. Yes, I think probably she could have worn Hunter boots, but she was wearing what she was wearing. I’m not good at advising people on what to wear because they wear what they want to.”
“They should just get rid of everybody and keep her,” he says. “Aesthetically, I mean, I’m not talking about politics – I don’t give a damn about that and I don’t know much about it. But in terms of fashion and beauty – well, I love her, she’s a beauty and that’s all there is to it.”
AdidasManolo BlahnikMelania TrumpPolitical FashionTexasWhat Melania Wore

What Melania Wore Returning to Washington

What Melania Wore to Governors Briefing on Coronavirus Response

What Melania Wore Arriving To Florida

What Melania Wore Returning to Washington