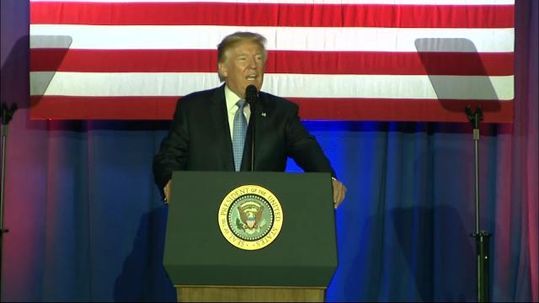 “The current tax system is a colossal barrier standing in the way of America’s economic comeback, because it can be far greater than it’s ever been,” the president said during a speech at the Farm Bureau Building in Indianapolis. “These tax cuts are significant. There’s never been tax cuts like we’re talking about.”

Trump added, “This is a revolutionary change, and the biggest winners will be the everyday American workers as jobs start pouring into our country, as companies start competing for American labor and as wages start going up at levels that you haven’t seen in many years.”

Early Wednesday morning, Republicans released the framework of their tax reform plan that was developed by “The Big Six” consisting of Trump administration in coordination with House and Senate leaders and committee chairs.

The nine-page plan lays out the framework of simplifying the tax system, cutting the tax rate structure by collapsing the current seven tax brackets to three — 12%, 25%, and 35%. By simplifying the tax brackets, most Americans would be able to file their taxes on a postcard. However, the plan doesn’t detail the income bracket levels for which the rates would apply, leaving it up to the House and Senate committee to decide when creating the legislation that will be passed with the budget reconciliation.

“For several months, my administration has been working closely with Congress to develop a framework for tax reform,” Trump said. “Over the next few months, the House and Senate will build on this framework and produce legislation that will deliver more jobs, higher pay, and lower taxes for middle-class families, for the working man and woman and for businesses of all sizes. I look forward to working with Congress to deliver these historic tax cuts and reforms to the American people.”

Under the tax plan, standard deduction nearly doubles for income of $12,000 for individual filers, up from $6,350 and $24,000 for married taxpayers filing jointly, up from $12,700. The plan also calls for an increase Child Tax Credit, opening this credit to families with higher income. The credit currently is $1,000 per child. As for corporations, the plan proposed their top tax rate cut from 35 percent to 20 percent. Alternative minimum tax and estate tax would also be repealed.

The speech given in Indiana is considered to give the public the newly unveiled tax reform plan as a way to pressure Democratic lawmakers to get on board. “Democrats and Republicans in Congress should come together, finally, to deliver this giant win for the American people,” Trump said. “Call your congressman. Call your senators. Let them know you’re watching, let them know you’re waiting. Tell them that today is the day for decision. That now is the time to heal this self-inflicted economic wound.”

Trump added, “If you demand it, the politicians will listen.”

During the speech, Trump called out Indiana Democrat Senator Joe Donnelly, who flew with him on Air Force One, to support the plan or expect a “campaign against him.”

“If Senator Donnelly doesn’t approve it — because, you know, he’s on the other side, we will come here, we will campaign against him like you wouldn’t believe,” Trump said, warning the Senator that he would personally work to defeat his re-election bid next year if he doesn’t support the tax plan.

Senator Donnelly issued this statement after the event:

“I work for Hoosiers, not President Trump or any political party. As it stands, the framework released today is missing many details that will be critical to determining whether working- and middle-class families truly stand to benefit. These Hoosiers will be foremost in my mind as I continue to engage with my colleagues in the Senate and also with the White House to try to craft a tax reform bill that will provide greater economic security to these families and also create and protect jobs here in Indiana.”

John Kelly to Step Down as White House Chief of Staff