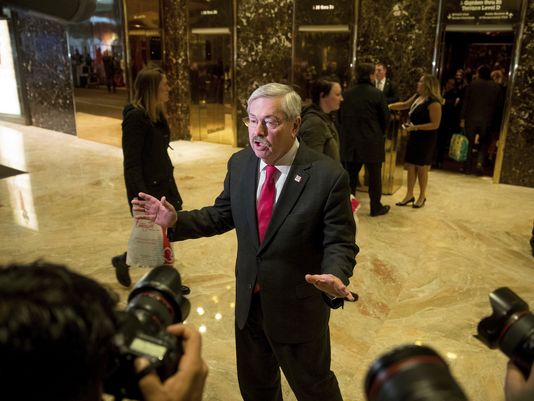 President-elect Donald Trump has selected Iowa Republican Governor Terry Branstad as ambassador to China, a spokesman for Trump’s transition  Jason Miller confirmed during a conference call with reporters on Wednesday.

“Gov. Branstad obviously as Iowa’s long-serving governor is someone who has considerable public-policy experience, but also someone who has a lot of experience and great grasp of trade issues, agriculture issues, has a tremendous understanding of China and Chinese people,” Miller said. “It’s very clear that Gov. Brandstad is someone who will represent our country well on the world stage.”

The appointment was first announced by the president-elect  during a breakfast fundraiser at Cipriani restaurant in Manhattan. During the event, Trump told the crowd of 800 donors that Branstad was a great choice for the post.

In a formal statement announcing the nomination, Trump praised Branstad’s relationship with China President Xi Jinping as the “ideal choice” to serve as ambassador to China.

“Governor Branstad’s decades of experience in public service and long-time relationship with President Xi Jinping and other Chinese leaders make him the ideal choice to serve as America’s Ambassador to China,” Trump said. “He successfully developed close trade ties with China while serving as chief executive of the Hawkeye State. That experience will serve him well as he represents America’s interests and further develops a mutually beneficial relationship with Chinese leadership.”

Branstad accepted the nomination after consulting with his family.

“After long discussions with my family, I am honored and humbled to accept President-elect Trump’s nomination to represent our great country as Ambassador to China,” Branstad said. “I am grateful for the opportunity I had to serve as Governor of Iowa and I look forward to serving in this extraordinary new role.”

Branstad met with Trump on Tuesday, but declined to say whether he was offered the ambassador post during the meeting.

“I’m really excited about the quality of people that he’s attracting to the cabinet,” Bradstad told reporters after meeting with Trump. “I’m very proud to have supported Donald Trump for president.”

The selection of Branstad being a prime candidate for the ambassador post was hinted by Trump just days before the election during a campaign rally in Sioux City, Iowa.

“I think there’s nobody that knows more about trade than Branstad,” Trump said before calling the governor onto the stage. “He’s one of the ones in dealing with China. You would be our prime candidate to take care of China.”

After Bloomberg first reported the nomination, Beijing responded to the news by calling Branstad an “old friend.”

“Governor Branstad is an old friend of the Chinese people and we welcome him to play a greater role in promoting Sino-U.S. relations,” Foreign Ministry spokesman Lu Kang said. “The U.S. ambassador to China serves as an important bridge linking the governments of the U.S. and China. We are willing to work with whomever takes this position to strive for the continued, sound and steady development of bilateral ties.”

RNC Will Invite Trump To Address Party At Spring Meeting

John Kelly to Step Down as White House Chief of Staff