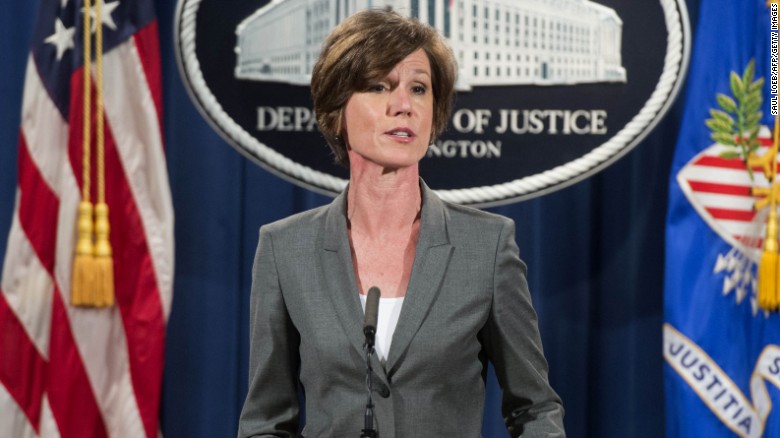 President Trump on Monday evening fired Acting Attorney General Sally Yates for “betraying the Department of Justice” and “refusing to enforce a legal order,” after defying the President in refusing to have the Justice Department defend his executive order

“The acting Attorney General, Sally Yates, has betrayed the Department of Justice by refusing to enforce a legal order designed to protect the citizens of the United States,” the White House statement said.

“Tonight, President Trump relieved Ms. Yates of her duties and subsequently named Dana Boente, U.S. Attorney for the Eastern District of Virginia, to serve as Acting Attorney General until Senator Jeff Sessions is finally confirmed by the Senate, where he is being wrongly held up by the Democrat Senators for strictly political reasons,” the statement from the White House reads.

Boente was sworn in at 9 p.m, according to a White House official.

“I am honored to serve President Trump in this role until Senator Sessions is confirmed,” Boente said in the White House statement. “I will defend and enforce the laws of our country to ensure that our people and our nation are protected.”

On Friday, Trump signed an executive order that bars citizens for 90 days of seven countries — Iran, Iraq, Libya, Somalia, Sudan, Syria, and Yemen. It also suspends the admission of all refugees for 120 days and indefinitely suspends the Syrian refugee program.

Yates, an Obama appointee, sent a letter Monday afternoon to Justice officials that detailed her decision not to defend Trump’s executive order, and ordering the Department of Justice not to make legal arguments defending Trump’s executive order that temporarily suspends immigrations from seven Muslim countries.

“Ms. Yates is an Obama administration appointee who is weak on borders and very weak on illegal immigration,” the White House statement reads. “It is time to get serious about protecting our country. Calling for tougher vetting for individuals traveling from seven dangerous places is not extreme. It is reasonable and necessary to protect our country.”

Shortly after news broke out of Yates letter, Trump tweeted from his personal Twitter account that Democrats are “delaying” and “obstructing” his cabinet pick, adding Yates letter was “political.”

The Democrats are delaying my cabinet picks for purely political reasons. They have nothing going but to obstruct. Now have an Obama A.G.