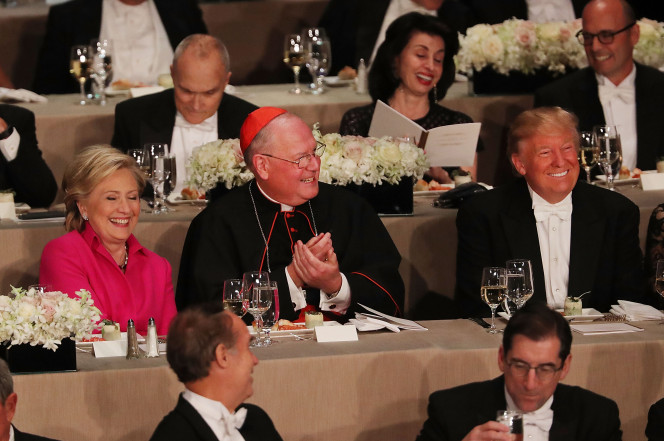 Just 24 hours ago, the final debate was seen to be the last time either Donald Trump and Hillary Clinton would be under the same roof with just less than three weeks before the American voters head to the polls.

The iconic Al Smith Dinner, a charity dinner that raises millions for Catholic charities, is well known every presidential year to invite candidates from both parties to come together to roast each other in a friendly manner during a time of a heated election. Held at the Waldorf Astoria, both candidates during the introduction and dinner portion completely ignored each other, showing their dislike for one another as they were face to face in between Cardinal Timothy Dolan. Neither candidate shook hands  when entering the event, just like in the last two debates until the completion of the dinner.

Al Smith IV, the chairman of the Al Smith Foundation, began the dinner with a few humorous remarks towards both Trump and Clinton as well as a few other politicians who were in attendance.

“Don’t worry [Rudy Giuliani],” Smith said. “We will aim the lights just right to ensure you will be in Donald Trump’s shadow all night.”

Smith added, “Governor Chris Christie was supposed to be here in attendance, but he got stuck in bridge traffic.”

Towards Clinton, Smith reminder her who has attended the dinner in the past with her husband former President Bill Clinton, to remain “stoic in the face of insults.”

“Hillary, I know you have been here a few times, so you know how this works,” Smith said. “You have to remain stoic in the face of insults. Just consider this the fourth debate.”

After the dinner portion ended, Smith introduced Trump as the first speaker, who received a warmly welcome compare to New York City Mayor Bill de Blasio. Smith poked fun of how the decision of Trump to speak first based off the decision of a coin toss, one would say “it was rigged.”

“No matter how the coin toss ended, our next speaker was going to say it was rigged,” Smith said. “And I was thinking of course of the Republican nominee Donald Trump. Donald, the microphone is yours and it’s working.”

Trump on stage turned his attention to Clinton, joking at the large crowd at Thursday dinner was “her largest crowd of the season,” speaking to a crowd of “major corporate leaders and not getting paid for it,” Clinton’s FBI investigation and his remarks during last night debate of calling Clinton a “nasty woman” was “relevant” from listening to her “rattle on and on.”

“It’s great to be here with 1,000 wonderful people,” Trump began his speech. “Or, as I like to call it, a small, intimate dinner with some friends. Or, as Hillary calls it, her largest crowd of the season.”

On Clinton’s email scandal, Trump poked fun of the issue how her invitation wasn’t sent by email because she wouldn’t have received it, but maybe would have found out from Wikileaks.

“I wasn’t really sure if Hillary was going to be here tonight because, I guess, you didn’t send her invitation by email,” Trump said. “Or maybe you did, and she just found out about it through the wonder of WikiLeaks. We’ve learned so much from WikiLeaks.”

Trump added on to the jabs by taking one liners found from leaked emails from Wikileaks that showed the Clinton’s campaign despises Catholics as well as one of Clinton’s paid Wall Street speech.

“For example, Hillary believes that it is vital to deceive the people by having one public policy and a totally different policy in private,” he said that received minor boos from the audience. “”That’s OK, I don’t know who they’re angry at, Hillary, you or I. For example, here she is tonight, in public, pretending not to hate Catholics.”

The most memorable line that was well received was Trump mentioning his wife, Melania Trump RNC speech and how the media was biased for making light of the plagiarism but loved it when First Lady Michelle Obama delivered it.

“I really have to say the media is even more biased than ever before. You want the proof? Michelle Obama gives a speech and everyone loves it. They think she’s absolutely great,” Trump said. “My wife, Melania, gives the exact same speech and people get on her case and I don’t get it. I don’t know why. And it wasn’t her fault.”

Clinton took the stage after, ignoring Trump as he returned to his seat. She kicked off her jokes by making fun of herself. “

I took a break from my rigorous nap schedule to be here.” Clinton said. “The audience, she added, should be grateful: “Usually I charge a lot for speeches like this.”

From there she attempted to make personal jabs at Trump, falling short at the punch line in her attempt.

“Donald looks at the Statue of Liberty and sees a ‘4,’” Clinton joked. “Maybe a ‘5’ if she loses the torch and tablet and changes her hair.”

Clinton went on to bring Trump’s campaign into the mix of the jabs.

“Looking back, I’ve had to listen to Donald for three full debates. And he says I don’t have any stamina,” Clinton said. “That is 4 1/2 hours. I have now stood next to Donald Trump longer than any of his campaign managers. Now, look, I have deep respect for people like Kellyanne Conway. She’s working day and night for Donald, and because she’s a contractor, he’s probably not even going to pay her.”

Clinton told Trump if he didn’t like what she was saying to interject and “feel free to shout Wrong!”