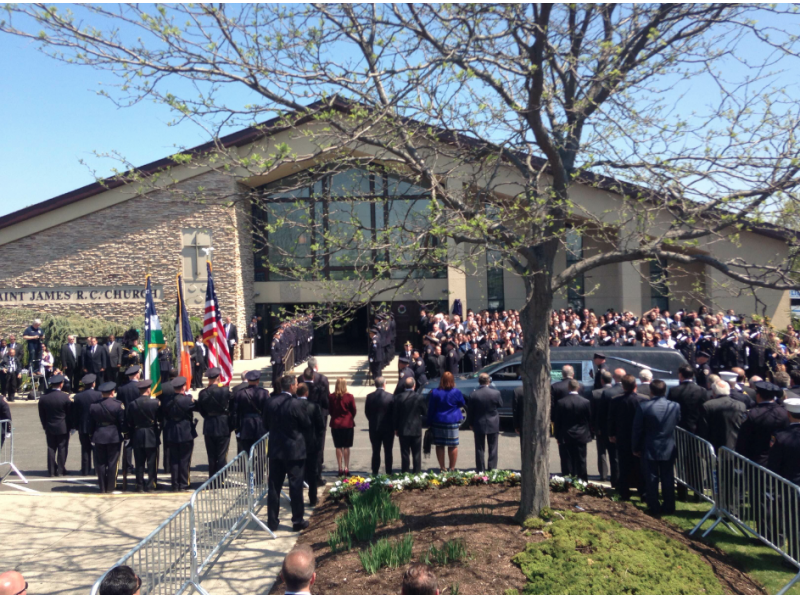 Long Island, NY —  It was a heartbreaking day on Friday as a sea of blue along with hundreds of people attended gathered outside of the St. James Roman Catholic Church in Seaford, Long Island to pay their final respects for NYPD officer Brian Moore. The crowd of law enforcement officers representing agencies across the nation came to show support for the NYPD. The dark sea of sadness and heavy hearts assembled on the warm spring morning as an estimated 30,000 officers attended the funeral. Moore was shot last weekend while on duty and died two days later on Monday.

Around 11 a.m, the funeral proceeded as eight uniformed pallbearers lifted Moore’s casket inside the church as bagpipes played “Amazing Grace.” The lines of white-gloved officers stretched about a mile long, standing in salute during the two-hour public farewell.

Officer Brian Moore was a 25 year old young promising officer who dreamed of following his father’s footstep and being on the force. Moore came from a family of police officers, with his father and uncle are retired sergeants and three cousins are also police officers. Moore was a five-year veteran who built up a record of more than 150 arrests and earned medals for his meritorious service. “He just couldn’t wait to be old enough to join the force,” Mayor Bill de Blasio said at the funeral, citing when Moore first took the police exam at the age of 17. 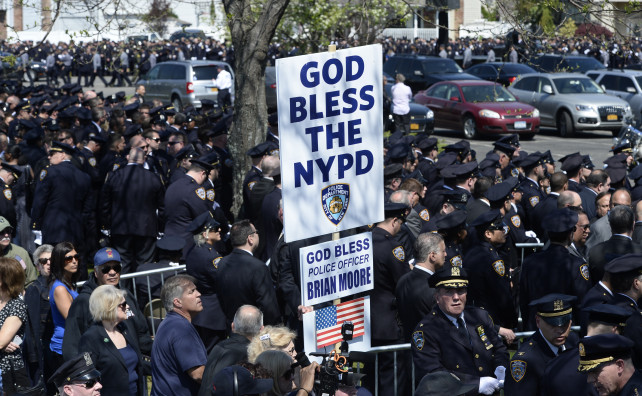 The detective shield was shown during the funeral with the No. 9002, following in line after Officer Ramos and his partner Liu who posthumously received No 9000 and 9001. “I hope the 9000 series never sees another— but that is an idle hope.” Bratton said

During the emotional eulogy given by Commissioner Bratton, the crowd outside the church gave applause as many watched the proceeding in the large screens.

“Not only did Moore dream of being a cop, he also dreamed of catching bad guys and taking them off the streets,” Bratton said

Bratton recalled, “he never showed up at work with the ‘why do I have to be here’ puss?”

Behind the badge was a jokester with an infectious smile, Bratton said. “We need more like him, we all need to be more like him.”

Moore’s death comes at a time of great challenge where officers across this country face criticism, Bratton said.

The past year has been difficult for police officers to do the job they love as protestors and career agitators accuse the whole police force of using ‘excessive force’ against blacks. New York police officers are personally being victims of this loud criticism as two of their own were gunned down in Brooklyn just days before Christmas. Officers Rafael Ramos and Wenjian Liu were assassinated by a man who targeted the police in retaliation for events that occurred in Ferguson and New York City. Last weekend shooting came at a time where many are still in shock by a third murder of their own in five months.

Mayor de Blasio spoke in a low voice saying Officer Moore was a rising star. “In a few short years, he had made it to the elite Anti-Crime Unit. He was respected by his elders, and he was looked up to by junior officers.”

“Brian Moore represents the best of New York City,” the mayor said. “He was brave for sure, but his bravery was matched by his compassion. And he came by it through his family. It’s in his DNA. A family devoted to the NYPD.” De Blasio recalled Moore’s last arrest of a gun bust when responding to a call of a stabbing in Queens in late April.

During the Mayor eulogy, officers didn’t turn their backs on de Blasio, as they have done so in the past two funerals for Officer Ramos and Liu just a few months ago, as a sign of protest. Moore’s death, unfortunately, was different as he was killed in the line of duty for doing the job he loved to do.

His death was a reminder of the dangers police officers face at a time when many anti-cop idiots forget how it takes someone brave to sacrifice their lives in services to the people and the community. It’s unfortunate a tragedy like this has to remind mostly everyone what police face and the outstanding job they do every day.

After the service, a sea of blue stood at attention as Moore’s casket was carried back outside to the hearse. The NYPD flag covering Moore’s casket was gently folded as the commander of the 105th Precinct where the young hero worked, presented the flag to Moore family. “America the Beautiful” was played as Moore’s family wept uncontrollably. After the funeral, nine helicopters flew low above the church in a missing man V-formation.

A candlelight memorial grew late Friday afternoon outside the precinct where Moore worked. Schoolchildren left cards and flowers honoring the local hero. Many neighbors stopped by to sign the memorial book for Moore to show their support.

Moore’s passing and his age alone was a shot in the heart to many still grieving of this lost. Family and friends worries every day if one who wears blue will come home tonight. One will call and text telling that special someone in blue to ‘be safe’ and asking ‘when will you be home tonight?’ My heart breaks every time I hear or talk about this and when I saw the flag folded into a triangle given to his mother, I broke down thinking of his mothers and how she buried her son right before mother’s day.

Detective Brian Moore was a true young hero of this city of New York taken away from us in a very short time. The dangers they face every day as they stick it out to protect the city from danger, not knowing what can occur in the short amount of time. That is why I love them and that is why I will grieve with them.

The Moore family released a statement on the Patrolmen’s Benevolent Association website Friday:

On May 2, 2015 our loved one Brian Moore, a New York City Police Officer, assigned to the 105 PCT in the anti-crime unit, was brutally shot in the head, when he and his partner were about to approach a violent convicted felon who was armed with a firearm. After a long fight for his life, PO Brian Moore succumbed to his wounds on May 4, 2015.

Due to these cowardly actions, a mother and father are left without their son, a sister is left without her brother, and his family and friends are left with emptiness in their hearts that can never be filled.

Once again, we would like to thank you for all of your love, support and generosity during this unforeseen tragedy.

Media Silent As Another NYPD Officer is Assassinated

Ahead of IAVA Forum, VoteVets Denounce Trump as “Unfit” Outside Trump Tower

Biden Joins Top Democrats In Calling On Cuomo To Resign

Trump Approves Use of USNS Comfort to Treat Coronavirus Patients

Media Silent As Another NYPD Officer is Assassinated