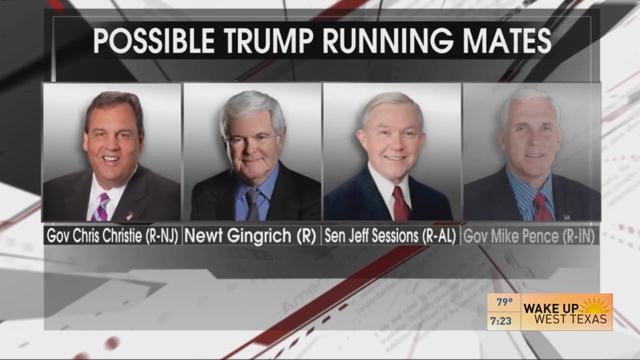 Who will be the lucky pick?

With the convention just ten days away, the focus of Donald Trump’s vice presidential search and who will he pick is on high alert.

Trump previously stated that he planned to announce his running mate at the RNC in Cleveland, but according to CNN reports, the presumptive GOP nominee is considering to announce his pick July 15, just 3 days ahead of the convention as means to get the maximum media buzz of his choice.

In an interview with Fox News Wednesday afternoon, Trump stated that there are 10 names in consideration with two of those being generals . However, he noted that he is more inclined to go “the political route” in picking a lawmaker in helping to get legislation passed instead of another outsider.

“I’m actually looking at 10 people,” Trump said. “Three or four called me up — very big names, senators and governors and all and they all want to be considered.”

“I like the generals. I like the concept of the generals. We’re thinking about actually – there are two of them that are under consideration,” Trump said. “But we’re looking to go more the political route, in terms of getting legislation passed, which is what they do.”

The comments from Trump came moments after both Corker and Ernst withdraw themselves from consideration. Still in the mix are Gingrich, who campaigned with Trump Wednesday night in Ohio and Pence, who meet with Trump on Saturday in New Jersey.

Senator Bob Corker (R-Tenn) in an interview with the Washington Post has taken himself out of the running, stating the VP job is “not the right thing” for him. “It’s a highly political job, and that’s not who I am,” Corker said. “I left there feeling very good about him as a person, but also realized that at age 63, I know the things I’m good at doing and knowing what a candidate for vice president has to do. It’s just not the right thing for me, and I don’t think it’s the right thing for them.”

However, Corker noted that he is instead open to serve in Trump’s cabinet, but declined to discuss details of which particular positions. “I feel like I’m better suited to other kinds of things and I think there are probably better suited people for this particular job for now,” Corker said. ”

Corker took his name out of the running a day after appearing with Trump in Raleigh, North Carolina during a campaign rally as part of his vetting trial run process. Prior to the duo appearance, the Tennessee Senator began to warm up to Trump becoming the GOP nominee, even offering to advise him on foreign policy issues.

Moments later, Trump had also lost freshman Iowa Senator Joni Ernst from consideration. The Iowa Senator told Politico in an interview moments after it was announced Corker withdrew his name that her focus is on Iowa and sticking around in the Senate, but plans to help Trump in getting elected.

Ernst met with Trump on Monday in New Jersey. It was announced on Trump’s twitter, fueling speculations during the 4th of July weekend as to whether the Iowa Senator and tea party favorite    would be formally vetted during the meeting. Also taking part in the private meeting included RNC Chairman Reince Priebus and campaign Chairman Paul Manafort in which the discussion focused on whether Ernst was interested in being vetted for the position and it was her call to decide in taking the next step forward.

However, Ernst will have a prominent speaking role during the RNC, delivering a speech focused on national security.

Hillary 3.0 Announcement in NYC: Long On Promise, Short on Detail