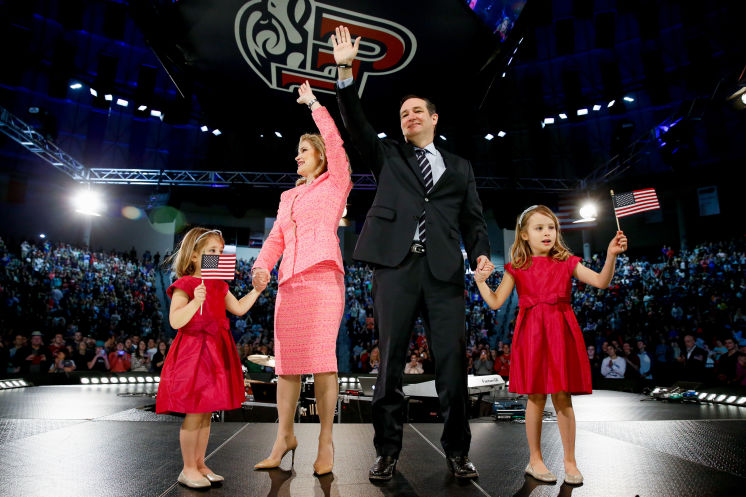 LYNCHBURG, Va. — Senator Ted Cruz (R-Texas) announced on Monday morning at Liberty University that he has thrown his hat into the ring for president in 2016. Cruz has become the first candidate of either party to officially declare his candidacy.

Opening his speech by stating, “I believe God is not done with America, yet”, he began with his family and his connection to his faith as he provided a detailed story about his parents. His mother, who grew up in Delaware and became a computer programmer, while his father was a Cuban teenage rebel fighter that fled the chaos at the age of 18 to America. Moving along, he mentioned his family problems from alcohol abuse to marital problems until his parents had a religious awakening that helped find their faith. “There are people who wonder if faith is real, I can tell you in my family there isn’t a second of doubt because if not the transformative love of Jesus Christ, I would have been raised by a single mother.”

Cruz, the first to officially declare his candidacy via Titter Monday at Midnight, his announcement included a 30-second video of “I’m ready to stand with you to lead the fight, will you join me.” A day before, it was reported by the Houston Chronicle of his official announcement for the presidency will occur on Monday.

Mentioning many conservative principles, Cruz told an energetic crowd of students using ‘Imagine’ at the beginning of each sentence laying out what America would be like if he takes office, as each sentence drew many loud applauses. “Imagine instead of economic stagnation, booming economic growth…Imagine abolishing the IRS…Instead of the lawlessness and the president’s unconstitutional executive amnesty, imagine a president that finally, finally, finally secures the borders…Instead of a federal government that seeks to dictate school curriculum through Common Core, imagine repealing every word of Common Core…imagine a president who stands unapologetically with the nation of Israel…Imagine a president who says we will stand up and defeat radical Islamic terrorism, and we will call it by its name. We will defend the United States of America.”

Cruz mentioned Obamacare, as Monday’s anniversary marks its fifth year into law. Gaining national media attention for his 21-hour filibuster on the Senate floor, Cruz and his vocal opposition of the law led to a tense standoff between Republicans and Democrats. Liberty University is also known for filing a lawsuit once President Obama signed Obamacare into law. Cruz mentioned the failures since it was signed into law of “joblessness, millions forced into part-time work, millions forced into part-time work and millions losing their health insurance and doctor.” Cruz ended by repealing “every word of the Obamacare” come 2017.

Ending his speech, Cruz stated his full announcement with “God’s blessing has been on America from the very beginning of this nation and I believe God isn’t done with America yet. And that is why today, I am announcing that I am running for president of the United States…We will get back and restore that shining city on a hill that is the United States of America.”

A conservative shooting star and firebrand to the Tea Party coalitions, Cruz a first-term senator is seen as a figure who is outspoken, passionate and energetic of his conservative positions to fight against Washington’s status quo. Disliked by some of his colleagues due to his constant pushback against establishment republicans. In 2013, he is known for the 17-day government shutdown as many democrats and some republicans saw this approach of destroying the country due to his battle to defund Obamacare.

His early announcement now puts Cruz in the advantage as he can seize the attention of the tea-party coalition as well as the big donors. Debuting his campaign announcement at Liberty University, an evangelical university, Cruz is also looking to gain traction of evangelical voters with his Christian conservative message to cut through a crowded field. Evangelicals are looking into former Arkansas Governor Mike Huckabee as their contender as well as former Pennsylvania Senator Rick Santorum.

Cruz, if he wins the nomination and the presidency in 2016 is set to become the nation’s first Hispanic president. Although Cruz was born in Canada, stated by the constitution, he is able to run for president since his mother is a natural born US citizen which meets the standards to run. If Cruz fails to win the nomination or drops out, Cruz will still retain his Senate seat through 2019.

Rand Paul Announces 2016 Run Promising To “Take our Country Back”