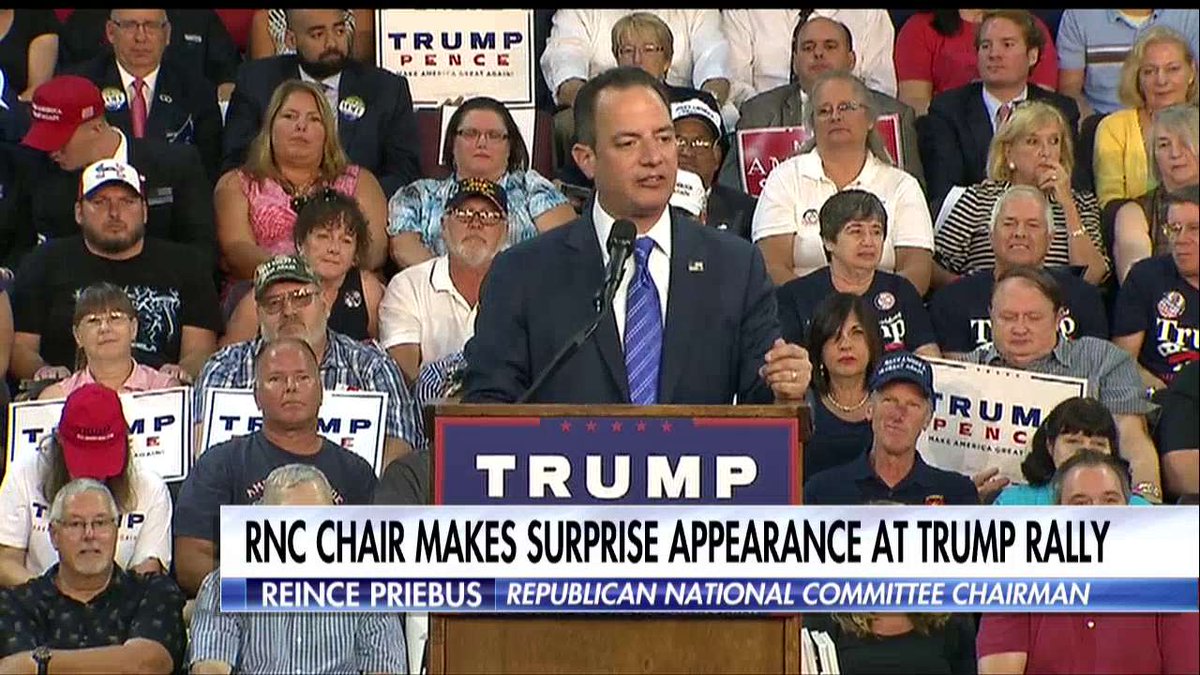 “Don’t believe the garbage you read,” Priebus said, introducing Trump. “Let me tell you something: Donald Trump, the Republican Party, all of you, we’re gonna put him in the White House and save this country together.”

The surprise appearance in Erie, PA came at the time amid reports of 70 high profile Republican officials of the #NeverTrump movement, calling for the RNC to redirect funding away from Trump campaign to invest in down-ballot Republican candidates instead.

Priebus praised Trump during his short five minute introduction to a crowd of over 9,000 at the Erie Insurance Arena, touting the GOP candidate while slamming his Democratic rival, Hillary Clinton.

The crowd began chanting “lock her up!” in which Priebus responded to the crowd chants.

“Let’s do this,” Priebus said. “Let’s beat her in November.”

Once introduced, Trump praised the RNC and the chair for the joint effort working his campaign in regards to fundraising and the tough battle he faces as a Republican to the road to the White House.

“Reince has done such an amazing job and the media is portraying him slightly inaccurately,” Trump said. “The head of the Republican National Committee has done such a great job. We’re friends. We work together. We work with a lot of other people and I have to say we have great unification. Now, every once in a while, you read about somebody that wants to be a rebel, so they can get a little free publicity for themselves.”

“Republicans have a tougher path,” Trump said, acknowledging he is facing a difficult electoral path. “Not my fault. It’s a tougher path for presidency.”

Regarding the remark that both Hillary and President Obama are the founders of ISIS that has taken over the media headlines this week, Trump told the crowd that he was being sarcastic.

On his former rivals who refused to endorse his presidency candidacy, Trump lashed out, telling them to get over it and to acknowledge the pledged they promised to honor, adding the pledge was created for to keep Trump in line and he would have kept his word and honor it had he lost the nomination.

“Some of them just can’t get over it, — Get over it,” Trump said. “We were just having fun. You signed a pledge to endorse whoever won the nomination.”