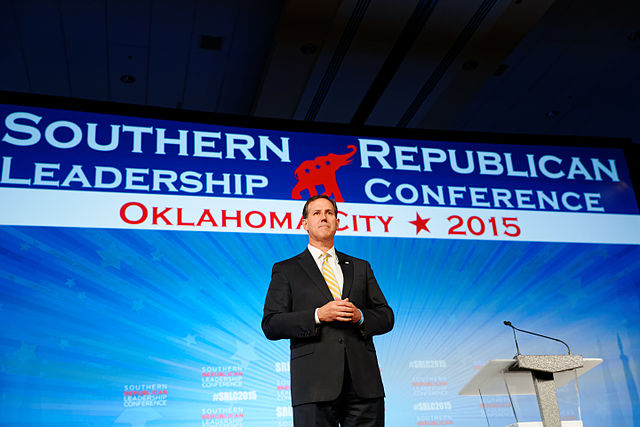 “Four years ago we didn’t talk about national security, but not its front and centered” Santorum mentioned while criticizing his fellow republican candidates and knocking on the Obama-Clinton foreign policy team.

“We can’t have a nominee against Hillary Clinton who sees commander in chief as entry level position, we need someone who has experience in this area, someone who has served in Washington on relevant committees like the Armed Services committees, worked on national security issues” Santorum said. “We don’t want a candidate who represents the party whose foreign policy experience is a briefing book.”

Santorum criticized the recent headlines questioning President George Bush’s going to war with Iraq. “Trying to nail Republicans for what happened six years ago is irrelevant; what’s relevant is the policies of this president that created ISIS,” Santorum said. “ISIS was created by Barack Obama, reporters should ask Hillary Clinton if she supported President Obama taking troops out of Iraq.”

Santorum said he knows the United States is “war weary” but states that it is time to “take a solid stand against ISIS.”

“I want to make sure we take the fight to them before they bring the fight to us,” Santorum said. “If ISIS wants to bring back a 7th century version of Islam, then we need to load up our bombers and bomb them back into the 7th century where they belong.”

On other issues, Santorum mentioned he intends to release a tax cut plan that includes ending the IRS in the next couple of weeks

Santorum plans to announce his bid for presidency on May 27 at a factory in Pennsylvania.

Rick Perry at #SRLC2015: “Leadership is Not Just a Speech on the Senate Floor”