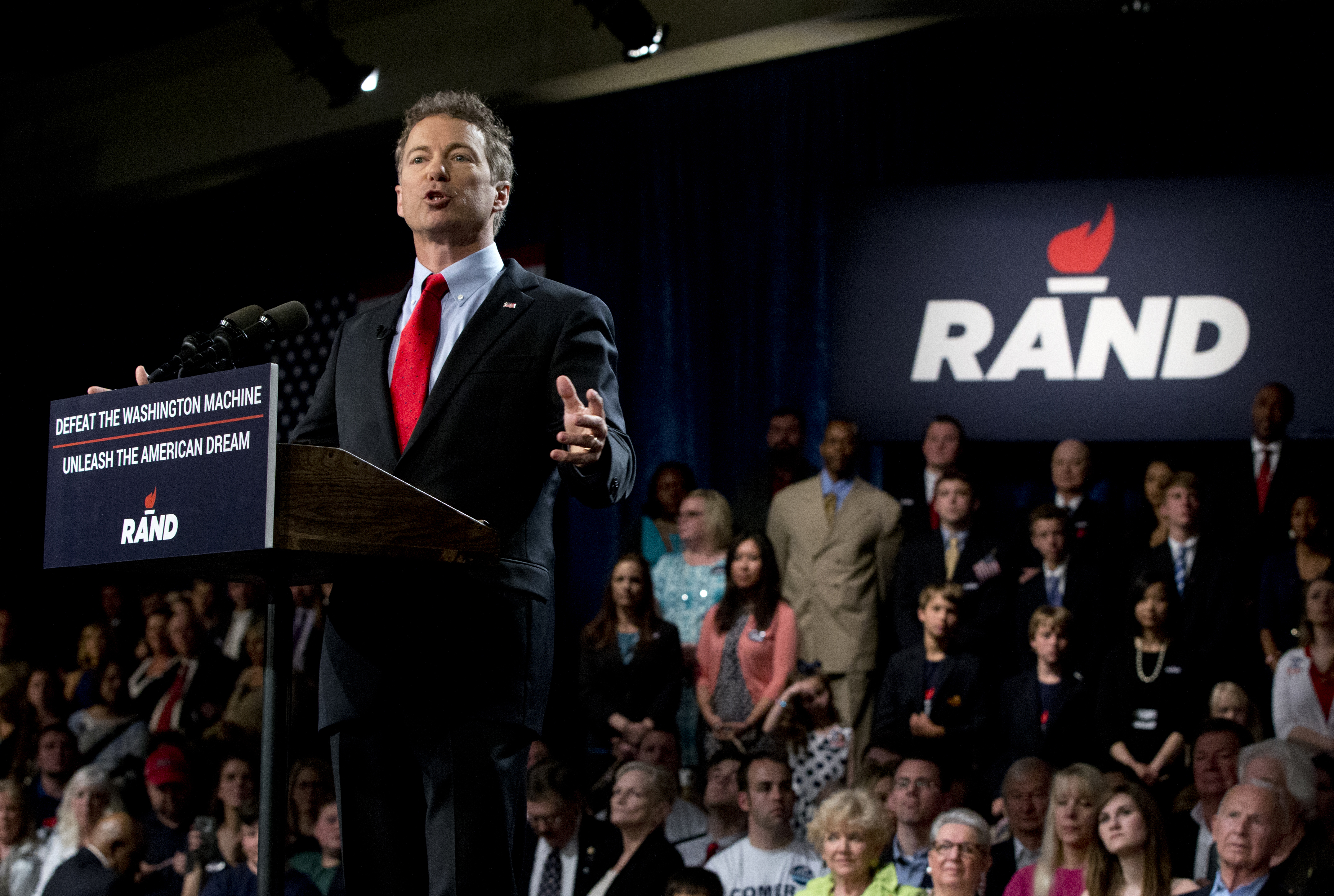 “Today I announce with God’s help, with the help of liberty lovers everywhere, that I’m putting myself forward as a candidate for president of the United States of America,” Rand Paul said at a rally in Louisville.

The first term Kentucky Senator who cast himself as a ‘different kind of Republican’ declared his presidential bid on Tuesday in Louisville. His 30-minute speech inside a crowded hotel ballroom outlined his libertarian-conservative vision of smaller government as Paul promised to shake up Washington.

“Big government and debt doubled under a Republican administration and is now tripling under Barack Obama’s watch,” Paul said. “We’ve come to take our country back from the special interests that use Washington as their personal piggy bank.”

Paul announcement was not left to any suspense as part of his announcement was put on social media adding “I am running for president to return our country to the principles of liberty and limited government.”

In foreign policy, Republicans paint Paul as weak against foreign defense, but Paul hit this issue by making it clear that he will not take a back seat on defending America. “The enemy is radical Islam…not only will I name the enemy, I will do whatever it takes to defend America from theses haters of mankind.”

Bring up the Iran deal negotiation over its nuclear program, Paul who has been silent on this issue, stated any “deal must be approved by Congress and will oppose any deal that does not end Iran’s nuclear ambitions and will have strong verification measures.”

The Senator who is known for criticizing President Obama’s domestic surveillance program drew a loud crowd when mention the United States have been compromised liberty for a false sense of security. Talking about the dangers of the NSA spying, Paul states, “As president, on Day 1, I will immediately end unconstitutional surveillance.”

On economic policy, Paul outlined that poor cities have failed from Liberal policies and can benefit from an “economic freedom zones by creating manufacturing jobs that will return overseas profits back to the United States and cutting taxes for American companies.”

Rand Paul portrays himself a different new kind of Republican by reaching out to young people and African Americans. These two voting blocs were seen to overwhelmingly vote for Democrats in the past. His brand of politics with the usage of aggressive social media presence can be seen as a challenge as his name ID and strong rally base can put Rand Paul as a top tier candidate.

Paul, the son of Texas Congressman, and former presidential candidate Ron Paul, who is seen to continue on with his father’s legacy of building the libertarian movement. However, the Senator will focus on a strategic operation of combining liberty and conservatism in hopes to compete with others who establish themselves as conservatives for the White House seat. The elder Paul is not expected to join his son on the campaign trail as the younger Paul tries to build the momentum of his father’s already established support base.

Paul announcement makes him the second official candidate from both parties to announce. His fellow Republican colleague, Ted Cruz announced two weeks ago, released a press statement welcoming ‘my friend Rand Paul’ into the primary.

“I am glad to welcome my friend Rand Paul into the 2016 GOP primary..his entry into the race will no doubt raise the bar of competition, help make us all stronger, and ultimately ensure that the GOP nominee is equipped to beat Hillary Clinton and to take back the White House for Republicans in 2016,” Cruz said.

Senator Marco Rubio of Florida is expected to announce early next week as well. The Republican field for 2016 is expected to be large as others such as Governor Scott Walker and Governor Jeb Bush are expected to declare soon. Paul will start his campaign this week to four early voting states of New Hemisphere, South Carolina, Iowa, and Nevada.