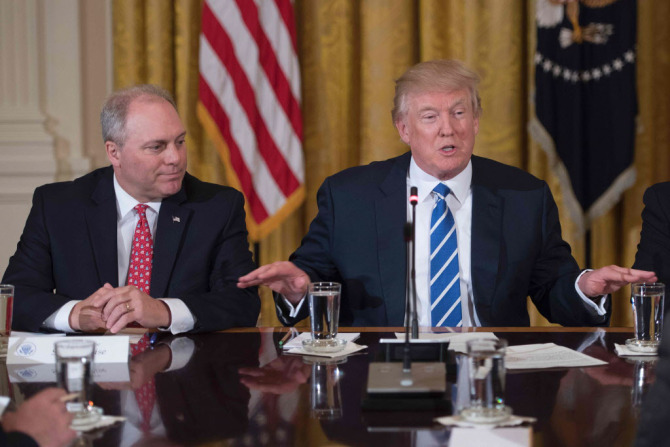 President Trump endorsed the Obamacare repeal plan released by the House on Tuesday.

“I am proud to support the replacement plan released by the House of Representative,” Trump said after a closed-door meeting with two dozen Republican House members at the White House. “I think, really, that we are going to have something that is going to be much more understood and much more popular than people can even imagine.”

Trump pointed out the plan follows the principles he addressed in last week’s joint session to Congress such as keeping costs low, expanding insurance plans, and allowing Americans to choose their doctor.

Our wonderful new Healthcare Bill is now out for review and negotiation. ObamaCare is a complete and total disaster – is imploding fast!

Under the new bill, the plan would preserve Medicaid expansion in Obamacare through 2020 and continue to offer tax subsides for those purchasing health insurance on the individual market. Insurance premiums would be adjusted, where younger, healthier patients will pay less, while older, sicker patients would pay more. As for insurance companies, they would have to offer coverage to those with preexisting medical conditions.

“And I think we are gonna have a tremendous success. It is complicated process, but actually it’s very simple. It’s called good health care.”

The Republican replacement also ends federal funding to Planned Parenthood, where the plan would no longer reimburse Planned Parenthood for providing women’s health care services such as contraception and cancer screenings using Medicare and Medicaid.

In a letter to lawmakers, Health Secretary Tom Price called the bill “a necessary and important first step.” During the White Press briefing, Price described the bill as “patient-centered health care,” where the new health care is “about the patients, not about money.”

According to Price, the plan will include four principles — affordability, accessibility, encouragement of innovation and empowering of patients

However, many of the President health care goals, such as allowing insurance companies to sell across state lines and allowing the government to use its purchasing power to negotiate better drug prices are not included in the 123 page bill. According to Price letter, these goals require a “budget reconciliation bill.”

Trump tweeted that he remains hopeful to pursue those goals and it will be included “in phase 2 & 3 of healthcare rollout.”

Don’t worry, getting rid of state lines, which will promote competition, will be in phase 2 & 3 of healthcare rollout. @foxandfriends

I am working on a new system where there will be competition in the Drug Industry. Pricing for the American people will come way down!

Many Republicans are deeply divided over the plan, with some criticizing the plan as “Obamacare lite.” Members of the House Freedom Caucus indicated they would release their own version of repeal-and-replace plan sometime this week, possibly threatening to stall the President’s effort to pass the House plan.

“The president made it very clear that this is his bill and there are no excuses — it’s time to act now,” Brady told reporters after meeting with President Trump. “It is clear he is putting his presidential weight behind the measure.”

If the measure were to pass in the House, the Senate might not give it the clear it needs to head to the President’s desk.

“There’s one thing that has united Republicans in 2010 when we won the House, in 2014 when we won the Senate, and in 2016 when we won the White House. This doesn’t divide Republicans, this brings us together, and that is complete repeal, clean repeal,” Paul said. “We are united on repeal, but we are divided on replacement.”

Lee called the plan “the type of back-room dealing and rushed process that we criticized Democrats for.”

“This is not the Obamacare repeal bill we’ve been waiting for,” Lee said. “It is a missed opportunity and a step in the wrong direction.”

House Speaker Paul Ryan said he can guarantee enough votes to win the measure to pass in the House. 218 votes are needed in the House to pass.

Democrats denounced the proposal, stating the plan would take away health insurance from millions of Americans and would add big tax cuts for the rich.

“Republicans have decided that affordable health care should be the privilege of the wealthy, not the right of every family in America,” said House Minority Leader Nancy Pelosi.

White House OMB Director Mick Mulvaney said the plan should pass the House in mid-April, in time before lawmakers head for break. The nonpartisan Congressional Budget Office is expected to review the bill within the next few days, according to Mulvaney.

Both the White House and Congress have forecasted April 7th as the target date for the passage of their replacement as the House Energy and Commerce Committee and the Ways and Means Committee will begin debating the bill on Wednesday.