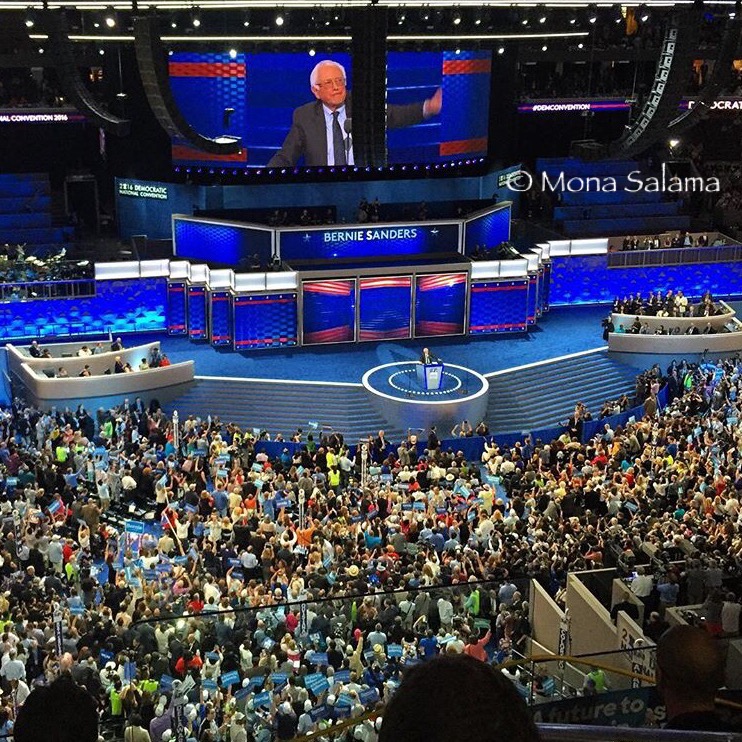 Philadelphia, PA. — Drama surrounded the first day of the Democratic National Convention in Philadelphia, with embattled DNCC Chairwoman Debbie Wasserman Schultz stepping down amid controversy over leaked emails, forcing Democratic leaders to shift its focus on the theme of unity.

Former Democratic primary rival, Vermont Senator Bernie Sanders sought to make the case for Hillary Clinton, delivering a full-hearted endorsement to ease anger supporters who are angered over the leaked emails from the DNCC that showed party leaders discussing ways to sabotage his campaign from winning the Democratic primary.

“Hillary Clinton will make an outstanding president and I am proud to stand with her here tonight,” Sanders said, to mixed chants from his supporters and Hillary’s supporters.

Earlier during a delegation rally early Monday afternoon, Sanders was met with boos from die-hard supporters when he urged for them to vote for Hillary. Outside the convention, several hundred supporters gathered to protest Hillary and the DNC, chanting “Hell no DNC, we won’t vote for Hillary!”

Inside the convention, supporters erupted in chants of “Bernie!” and voiced their disapproval for Hillary when her name was mentioned several times, even though Sanders’ campaign issued an urgent text message and emails urging delegates to refrain from booing and interrupting proceedings inside the convention floor.

“Our credibility as a movement will be damaged by booing, turning of backs, walking out or other similar displays. That’s what the corporate media wants. That’s what Donald Trump wants,” Sanders said in the email.

Moments to the convention opening, the DNC issued an apology to Sanders and his supporters, hoping the headlines would be an after thought before Hillary accepts the Democratic nomination.

“On behalf of everyone at the DNC, we want to offer a deep and sincere apology to Sen. Sanders, his supporters, and the entire Democratic Party for the inexcusable remarks made over email,” the statement reads. “These comments do not reflect the values of the DNC or our steadfast commitment to neutrality during the nominating process. The DNC does not — and will not — tolerate disrespectful language exhibited toward our candidates. Individual staffers have also rightfully apologized for their comments, and the DNC is taking appropriate action to ensure it never happens again.”

Entering the stage as the last speaker of the night, Sanders waited three minutes, before taking his final bow of the 2016 Democratic primary. Delegates emotions were running high as Sanders took the stage with many cheering with anger while some cried with the feeling their political movement was coming to an end Monday night.

However, he noted the drama would continue on, hinting a unity within the party would not occur just yet.

“I understand that many people here in this convention hall and around the country are disappointed about the final results of the nominating process,” Sanders said. “I think it’s fair to say that no one is more disappointed than I am.”

Sanders added, “I look forward to your votes during the roll call tomorrow night.”

Listing off a number of accomplishments of his “political revolution” he has achieved as an insurgent candidate, Sanders noted how both his campaign and Hillary’s differ on the issues, but was able to work with them to achieve the platform reforms he desired such as breaking up “major financial institutions on Wall Street,” and preventing TPP from passing in Congress.

“It is no secret that Hillary Clinton and I disagree on a number of issues,” Sanders said. “That’s what this campaign has been about. That’s what democracy is about. But I am happy to tell you that at the Democratic Platform Committee there was a significant coming together between the two campaigns and we produced, by far, the most progressive platform in the history of the Democratic Party.”

Sanders, in his 30-minute speech emphasized the importance to support Hillary over the alternative, GOP nominee Donald Trump.

“If you don’t believe this election is important, if you think you can sit it out, take a moment to think about the Supreme Court justices that Donald Trump would nominate and what that would mean to civil liberties, equal rights and the future of our country,” Sanders declared. “In these stressful times for our country, this election must be about bringing our people together, not dividing us up. While Donald Trump is busy insulting one group after another, Hillary Clinton understands that our diversity is one of our greatest strengths.”

Trump watching the turmoil unfolding in the DNC, live tweeted the event via Twitter.

Bernie Sanders totally sold out to Crooked Hillary Clinton. All of that work, energy and money, and nothing to show for it! Waste of time.