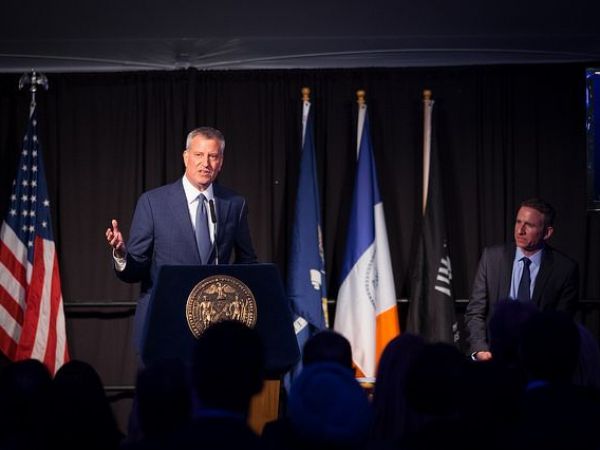 “Many New Yorkers may be feeling distressed or vulnerable following the election results,” the email “Feeling stressed? Resources for City employees” sent on Dec.1 to City employees reads. “We have seen the concerns expressed on social media and we are monitoring them closely.

Over half of dozen agencies are involved in “providing support.” Those agencies include, The Office of Immigrant Affairs (MOIA), Department of Health and Mental Hygiene (DOHMH), Department of Education (DOE), Department of Youth and Community Development (DYCD), Office of Labor Relation’s Employee Assistance Program (OLREAP), and Office of Deputy Mayor for Strategic Policy Initiatives who oversees the mental health initiative known as Thrive NYC. In the email, all these agencies are listed to direct workers to available mental health resources. “We hope to maintain resilience, raise awareness of symptoms to support early intervention and provide information about available resources, including NYC Well, the City’s 24/7/365 connection to care, which offers with interpretation services in over 200 languages,” the email continues, with links to literature and tips on “coping with stressful events.”

A City Hall spokesman didn’t provide much information as to why they sent this email, stating the post-election period is a “very difficult time for those coping with mental health challenges.”

“The post-election period has been anxiety-producing for many people, understandably. When you throw the holiday into that, it can be a very difficult time for those coping with mental health challenges.”

Since Trump’s victory, de Blasio has pledged to “use all the power of this city” to protect New Yorkers from potential administration policies such as cutting funding for sanctuary cities and Planned Parenthood. The mayor has put blame directly on Trump for an increase in hate crime incidents.

“Do I blame Donald Trump for using hate speech during his campaign?” de Blasio said during a press conference earlier this month discussing monthly crime stats. “Absolutely. It’s a fact. He said horrible things about Muslims, about Mexican-Americans.”