“Today is such an honor as I dedicate my inaugural couture piece to the First Ladies exhibit at the National Museum of American History,” Trump said. “In addition to celebrating fashion, which is something I have loved since I was a small child, there is no better way to memorialize such a special evening, and new chapter in the life of our family.”

During her speech, Melania admitted that securing a ball gown totally slipped her mind, so she reached out to the designer with a tight two-week deadline to craft this “gorgeous couture piece.”

“As most of you know, before he ran for president, my husband was never in politics. So you can imagine that after he won, we were very busy,” Melania said during the Smithsonian ceremony at the National Museum of American History Friday morning. “To be honest, what I would wear to the inaugural ball was the last thing on my mind.”

“I wanted someone who would be willing to collaborate with me and Hervé exceeded my expectations,” Melania said, adding she had a “precise idea” of what to wear for the “historic event.” “When sitting down with Hervé, I had to discuss my vision, and I expressed a desire to have a modern, sleek, light, unique, and unexpected.”

Melania added, “This piece is one of the many new beginnings of our family’s history here in Washington. The President, Barron and I all love it here.”

The Smithsonian’s First Ladies Collection exhibition tradition began with First Lady Helen Taft, wife of President William Howard Taft in 1912. Since then, according to Lisa Kathleen Graddy, the curator of collection exhibition, “it became a custom” for the first lady to give her gown as a donation request for the public to view. A total, with the addition of Melania’s dress will bring the Smithsonian collection to 27 first ladies inaugural gown, with also over then 160 other first lady clothing items and accessories to show the position, moments and influence held by the first ladies.

After the inauguration, The Smithsonian museum works with the White House with the donation process, crafting a mannequin that exactly resembles the first lady’s physique.

Melania’s inaugural piece is an ivory silk crepe column gown, detailed with ruffle accent trump and a slit in the skirt. The off-the-shoulder neckline and a skinny claret ribbon around the waist gave the gown simplicity. The First lady wore the gown to three inaugural balls that night.

Designed by French-born designer Hervé Pierre, a former creative director for Carolina Herrera, his designs were often worn by former first ladies Michelle Obama and Laura Bush. According to Melania, she didn’t have a personal relationship with the designer like she has with other famous designers before asking him to design her inaugural gown.

“What was bizarre was I’ve designed thousands of dresses in my life, but if you Google my name, that is the dress that will be remembered and attached to my name forever,” Pierre said Friday. “That dress had to be forever good. There was no room for mistakes, and that was the most scary part.”

Pierre, in an interview last month with the The New York Times, Pierre never met Melania before until she reached out to him on January 3rd, two and a half weeks before the inauguration.

“She gave me a couple of key words,” Pierre said. “She didn’t want a big ball gown, she wanted something sleek, ivory, vanilla. It had to be really, really right because it was going to be part of history — part of this country’s history but also part of what I will have achieved on earth. I have designed thousands of dresses, but people will remember this one most particularly.” 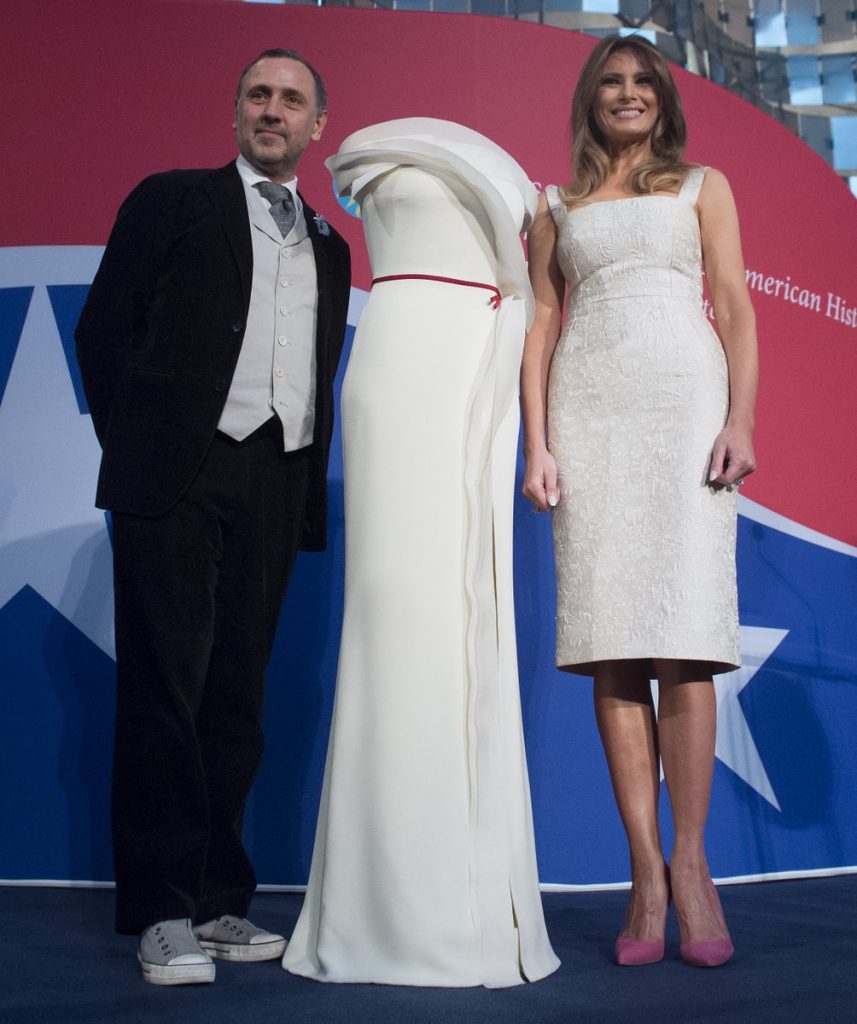 Since the inauguration, Melania has worn custom-made Pierre designs, most notably in July at a private Eiffel Tower dinner with her husband, President Donald Trump and French President Emmanuel Macron and his wife, Brigitte. Melania wore a red, white and blue dress, with an embellished design on the bodice.

Pierre was also in attendance for the donation ceremony. Melania’s inaugural ball gown will be on display starting Friday afternoon.

What Ivanka Wore to the Hanukkah Reception