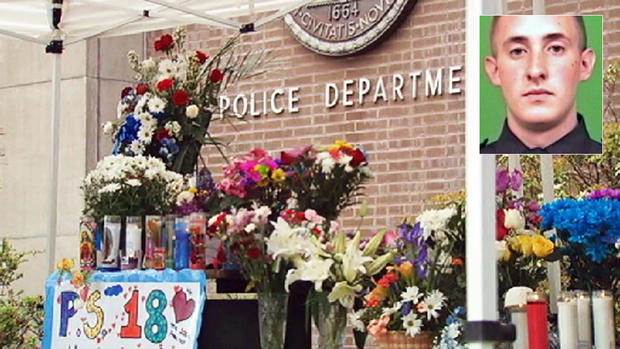 On May 2 another NYPD police officer was shot in the face, the fifth officer struck by gunfire in the line of duty and the third to be killed in the past five months.

The officer, Brian Moore, 25, along with his partner Erik Jansen stopped the suspect, a cowardly ex-con, Demetrius Blackwell, 35.  Noticing Blackwell adjusting his waistband while behind the wheel of an unmarked cop car,  Moore drove up next to him and asked, “Do you have something in your waist?” With little hope to defend themselves, Moore was hit in his forehead where the bullet exited the opposite side of the face according to police sources. His partner was not struck and immediately called for assistance.

Moore was rushed to Jamaica Hospital by fellow officers patrol car where doctors performed four hour emergency surgery to repair the damage from the bullet that struck his forehead and exited the back of his neck which tore his brain stem. During the surgery, half of Moore’s brain was removed, a source saying the chance for a survival was minimal and Moore would have been completely incapacitated. Moore was then placed in a medically induced coma after the surgery where he was listed in critical but stable conditions. Fighting for his life, Moore’s condition worsened overnight as he began to bleed uncontrollably and his blood pressure plummeted. There was little hope for Moore as his family decided to pull the plug of life support; he was later pronounced dead early Monday afternoon.

While Moore was struggling to survive on Sunday, the perp was charged on Sunday with attempted murder of a police officer and assault and criminal possession of a weapon. After Moore’s passing, Queens prosecutors upgraded the charges to first-degree.

Over 100 uniformed officers stood outside at attention to salute as Moore’s body was taken from the hospital in an ESU truck. “It is with great regret and sadness I announce the passing of New York City police officer Brian Moore, shield number 469, New York City police officer, hero of the city, killed in the line of duty,” said Police Commissioner Bill Bratton. Moore’s passing drew condolences from cops on the beat all the way up to even President Obama.

“Our hearts are heavy today as we mourn the loss of Police Officer Brian Moore,” Mayor de Blasio said in a statement. “For five years, Brian served with distinction and he put his life on the line each day to keep us all safe. On Saturday, he made the ultimate sacrifice in service to the people of New York City.”

“Cops deserve our gratitude and our prayers not just today but every day. They’ve got a tough job,” President Obama said briefly in an event in New York City with Rev. Al Sharpton present.

Governor Cuomo issued a statement regarding the passing,

“The shooting of Officer Brian Moore over the weekend was a deplorable act of violence that has robbed New York of one of its finest. As a member of the NYPD, Officer Moore put the safety of his fellow New Yorkers before his own, and we will remember his service with gratitude and pride. I join with all New Yorkers in mourning his passing and send my deepest condolences to his friends and family.” 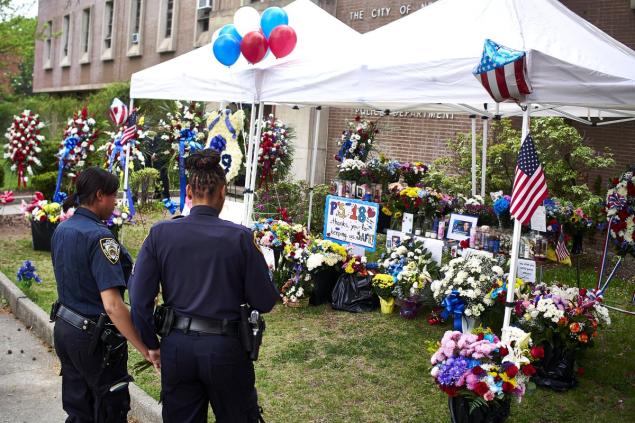 However, as the overwhelming supports continue to grow, the story isn’t getting the same type of attention as the Freddie Gray case in Baltimore despite the fact that yet another officer was killed within a short time after the assassination attempt of another two NYPD police officer in December. Will there be protests to show the outrage of this beautiful young soul who became a cop and was taken away from us in a short time? I wish, but don’t count on it.

So where is the protest? I know I wouldn’t have never missed it for the world. The truth is, the people who support our men and women in blue both locally and nationally are not career agitators. These career agitators can focus their entire time and life to undermining the very important glue that keeps society safe. The agitators are the ones who march to disarm the NYPD and create a no cop zone, taking a politicized incident of an officer using force to defend themselves to damn the entire the entire profession dedicated to civil order. They are the ones trying to destroy the one thing that keeps the peace and the community together, but are the first ones crying for the cops help when they are in danger.

It’s disgusting how society seems set on destroying the good.

The ones who support our officer unconditionally have jobs and family and don’t have time to protest and make a show. However, the passing of this young NYPD officer were met with anger and shock. It reminded me that New York, no matter how much chaos is going on, isn’t full of these anti-cop haters. It is actually a community of good New Yorkers that do care about the NYPD.

I don’t blame police for being livid as they remain strong and continue to do the job to serve and protect. If the roles were reversed and Officer Moore shot and killed this ex-con suspect, it would have flooded the news outlets from the first to last the hour and the commentators mostly condemning that cops kill black men. It’s a myth that officers discriminate or target blacks hunting them like it some sort of sport.

What is going on in NYC that our police officers, in a short amount of time, are getting shot in assassination-like ways? Are the perps shooting at cops in response to the current anti-cop animosity being shown non-stop on television? Politicians and the liberal media are feeding into the anti-cop feelings where the information they present is totally biased–and unfortunately, it’s the officers doing their jobs that have to pay the price.

Ted Cruz at #FITN: “Destroy ISIS and NO Vote for Lynch”

Ted Cruz at #FITN: “Destroy ISIS and NO Vote for Lynch”