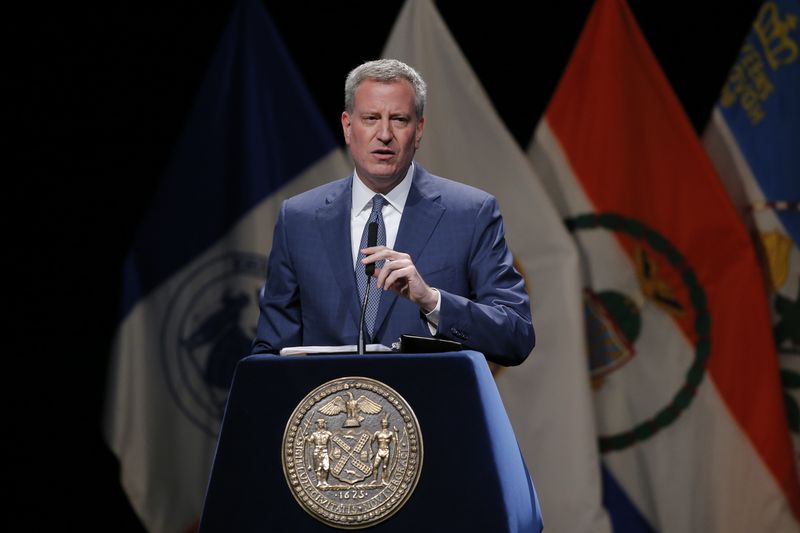 Speaking to reporters in an off the topic Q&A, New York City Mayor Bill de Blasio fiercely defended undocumented immigrants, thanking a grocery store owner from Brooklyn who admitted to the mayor on radio for violating federal law who are cheating the public for not paying FICA

“With almost 12 million undocumented immigrants in this country, deporting them would be repulsive and destroy the positive image of America in the world,” de Blasio said. “Do you think if any individual employer changes their behavior, it will change value of 12 million people. We ought to change the laws and we need comprehensive immigration reform.”
The question was brought up in regards to the de Blasio weekly “Ask the Mayor” segment on WNYC, the Brian Lehrer Show (http://beta.wnyc.org/story/trump-immigration-history-campaign-finance-spotting-psuedo-facts ) where the Democratic mayor praised a caller who employs undocumented immigrants without the appropriate papers. The caller from Brooklyn name Thomas, runs a supermarket where he stated a large amount of his employee are undocumented and he is caught between breaking rules and protecting his business.
“Of course you’re running a business, and if someone is willing to work hard for you, of course you are going to hire them. If you’re giving them a job that they can feed a family on, and I thank you for that, we should normalize the equation,” de Blasio said. “You should not be penalized for hiring someone, and they should not be penalized.”
On sanctuary cities and his own administration’s ban of ICE from Rikers Island Correction facility, de Blasio defended the law that defends undocumented immigrants and offered a rebuttal to Trump’s immigration speech that will cut off federal funding to cities that offer sanctuary cities and of those that refuse to corporate.
“Sanctuary cities is a deeper concept and I believe its the right concept,” de Blasio asserted. “These are our fellow New Yorkers and we are going to respect them, protect them because they are a part of our communities. Half of million here in New York and twelve million nationwide and we are going to stop denying their existence or treat them like second class human beings and embrace them. Thats the core concept.”
De Blasio added he tone of Trump immigration speech is meant to “win right-wing votes,” and his proposal wouldn’t pass as law even with a Republican congress.
“When it comes to the exceptional situation that Trump likes to talk about and point to… the premise that Trump is putting forward is off base. Trump talks about a few tragedy that happens and the Republican party both in the House and in the Senate know that an anti-immigration policy will set the country back,” de Blasio stated. “It is just Donald Trump trying to win over the right-wing portion of the party votes.”
De Blasio went on to add the need for sanctuary cities, while objecting the notion of deporting 12 million people.
“Taking away sanctuary cities concept then you are going to create a world that everyday New Yorkers that happen to be undocumented will make the city less safe for the fear of not talking to police or fear of deportation,” de Blasio said. “Deportation of 12 million people would be repulsive to the American people and destroy the positive image of America in the world.”
Mayor Bill de BlasioNYC

Ahead of IAVA Forum, VoteVets Denounce Trump as “Unfit” Outside Trump Tower

De Blasio Rips Cuomo: ‘The Bullying Is Nothing New’