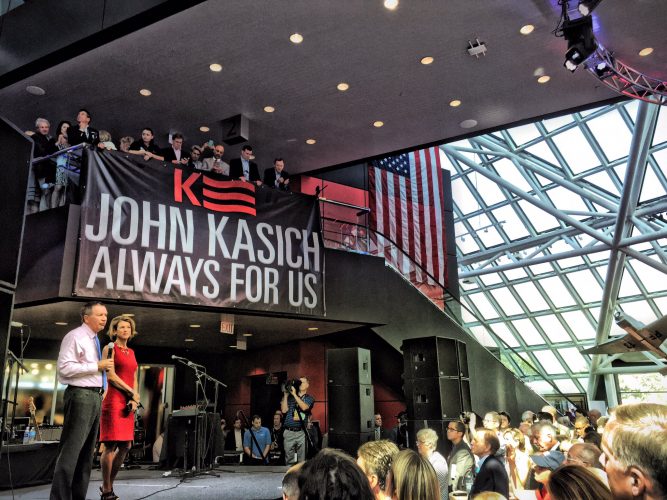 Cleveland, OH. — Cleveland is in the spotlight this week and its own governor decided to skip out on the biggest event of them all — the Republican National Convention

In his mid-afternoon event, Kasich held a reception where over 1,500 Ohioans gathered at the Rock and Roll Hall of Fame. The party scenery was pictured like a major victory — jumbotron playing pictures of the campaign trail, loud classic rock music, drinks and cake pops.

But, Kasich didn’t have much to celebrate. Two months ago, Kasich became the last GOP candidate to drop out, making Trump the presumptive nominee. If he would have gone forward, Kasich told the crowd he would have told voters things that weren’t true.

“We hear a lot of negative and division and polarization,” Kasich said. “Let me tell you. I’ve never been more satisfied professionally. We left the race abruptly. And the reason why we did is that I became convinced, that in one way or another, to go forward I would have to tell people things that I didn’t think were true.”

The party was thrown to celebrate and thank Ohioans for their work they did on his failed presidential bid.

“I asked for this to be done so I could have an opportunity to thank you all for your work,” Kasich told the crowd. “I can’t thank you enough for everything you’ve done.”

During his short seven minute remarks, Kasich avoided mentioning the GOP nominee, instead using his past campaign stump speech of positivity and unity to contrast the difference between himself and his former rival.

“The message for me was never about rhetoric,” Kasich said. “There’s no way I would enter a race for president just to win an election.”

Refusing to show face at their own party’s convention held in its own home state is rare. But, Kasich is becoming the first governor in doing so. Before the convention kicked off, Kasich on Monday said that he wouldn’t show up unless the presumptive GOP nominee changes his campaign negativity and remarks. “We can’t be attacking Muslims and Hispanics, and trying to shut down trade, and not caring about the debt,” Kasich said in an interview with NBC. “Those are all problems for me.”