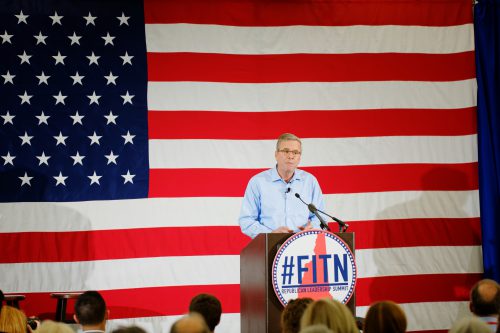 Nashua, NH. — Former Florida Governor Jeb Bush has a
biggest challenge if he decides to run for presidency —  his last name.

Addressing “the dynasty thing,” Bush spoke to New Hampshire voters, trying to make the distinction between both his father and his brother, a convincing hard to overcome since both previous Bush’s didn’t do well in the Granite State. Met with skepticism and hostility from the voters gathered in First of the Nation Summit, Bush sought to win over his skeptics who are not too crazy having a third Bush in the White House.

“I’m going to have to show my heart, show who I am, tell my story,” he said. “It’s a little different than the story of my brother and my dad. This may come as a shock to you, but you have brothers and sisters so you may appreciate this: We’re not all alike. We make our own mistakes in life, we’re on our own life’s journey.”

Bush’s speech focused mostly on telling the audience that he is indeed a conservative with his record during his tenure as governor of Florida. “My record is a conservative one,” the yet to formerly declare presidential candidate said. “It’s an I’m-not-kidding conservative record, a record of accomplishment. I did it, and I didn’t just talk about it.”

The former governor emphasized his accomplishments during the speech, a selling play that Bush hopes will show Republicans that in fact he a conservative. He argued that he “cut taxes, reduced the size of the government workforce, created 1.3 million new jobs, and left the state with billions in funds.” “Accomplishment matters,” he said, adding, “The big desk is different than a United States Senator.”

On the issue of Common Core, a standard the former governor supports and conservatives are opposed to, Bush argued that states need “a high standard to improve student achievement” and that “we don’t need a federal government involved in this at all.”

During the Q&A segment after the speech, an audience member told Bush that she is worried about the nomination process will be a “coronation since it seems like the establishment is backing you as a candidate.” Bush replied that he doesn’t see any “coronation coming my way, trust me. I will have to earn it if I get into the arena, nobody is going to give it to me.”

Rick Santorum at #SRLC2015: “ISIS was created by Barack Obama”