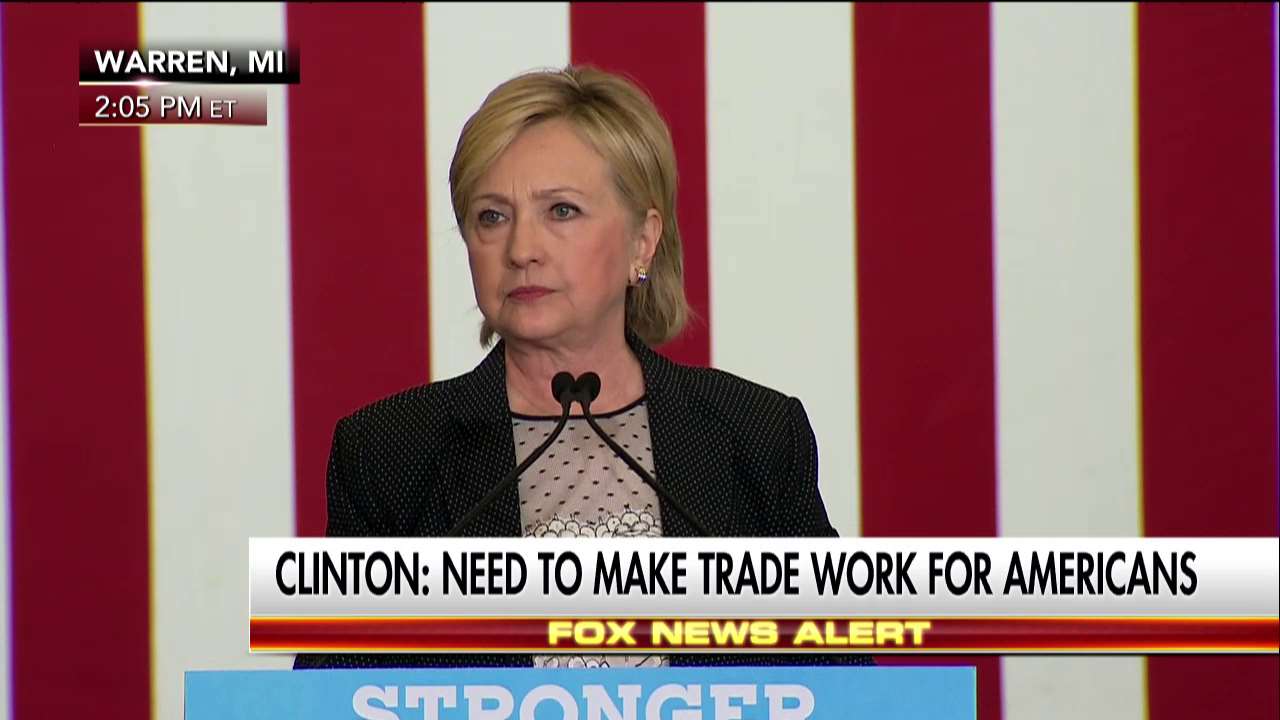 In a speech about the economic Thursday afternoon, Democratic candidate Hillary Clinton gave a rebuttal of her rival, Donald Trump’s economic speech, slamming his plan as “outlandish Trumpian ideas” and his tax plan as “Trump Loophole.”

“[Trump] speech on Monday, he called for a new tax loophole – let’s call it the Trump Loophole – because it would allow him to pay less than half the current tax rates on income from many of his companies,” Hillary said in Warren, Michigan. “He offered no credible plans to address what working families are up against today. Just a more extreme version of the failed theory of trickle-down economics, with his own addition of outlandish Trumpian ideas that even Republicans reject.”

During her address, Hillary laid out what she calls a striking contrast to Trump’s plan, offering very few details of what she calls the “biggest plan since WWII.” Her theme revolved around asking the 100 audience members, most of them union members to ask themselves these four questions before casting their ballot for Trump — who has a real plan for jobs, restore fairness to ensure the top will pay their fair share, who would go to bat for working families, and who can bring people together.

“I hope that after giving a fair hearing to both sides, you will join the millions of people across our country supporting this campaign – not just Democrats, but a growing number of Republicans and Independents as well,” Hillary said after asking the four questions to voters. “One of the differences between Donald Trump and me is I’m telling you what I will do, I’m laying out my plans, and I will stand by them, and I want you to hold me accountable for delivering results.”

When talking about passing the “biggest investment in good-paying jobs since WWII,” Hillary vowed to help cities like Detroit, that has suffered in manufacturing jobs thanks to trade deals of NAFTA, with investments such as “affordable housing, repairing failing water systems and have Americans by 2020 have access to broadband internet.”

Hillary went on to accused Trump plan to only look out for wealthy people like himself, slamming his proposal to eliminate the Estate Tax and offering nothing to help the working families.

“There is Trump’s tax plan,” Hillary said. “He would give trillions in tax cuts to big corporations, millionaires, and Wall Street money managers. That would explode our national debt and eventually lead to massive cuts in priorities like education, healthcare, and environmental protection.”

She slammed Trump’s agenda as one that would put the “economy back into recession,” using past economic advisor analysis to state his plan would “result in a loss of 3.4 million jobs.” Hillary contrasted his plan to her, stating the same analyst said the plan she is offering would “create more than 10 million new jobs, while making Wall Street and corporations pay their fair share of taxes.

“So I’m proposing a new tax credit to encourage more companies to share profits with workers. More broadly, we will fight for a more progressive, more patriotic tax code that puts American jobs first,” Hillary said. “And Wall Street, corporations, and the super-rich, should finally pay their fair share of taxes. That’s why I support the so-called ‘Buffett Rule,’ because multi-millionaires should not be able to pay a lower tax rate than their secretaries.”

Hillary went on to make a plethora of promises to describe that her plan will put people to work.

“We will put Americans to work building and modernizing our roads, our bridges, our tunnels, our railways, our ports, our airports,” Hillary said. “We’re going to invest $10 billion in what we’re calling ‘Make it in America’ partnerships to support American manufacturing and recommit to scientific research that can create entire new industries.

On trade, an issue that Trump and her former Democratic rival Bernie Sanders have targeted her for creating and supporting trade deals they both state work against America, Hillary continued to reiterate her opposition the Trans-Pacific Partnership even though it was revealed that she does’t. During the Democratic National Convention, it was revealed that her one of her trusted allies, Terry McAuliffe said that Hillary will support the TPP deal if elected president, only tweaking specific things. The remark infuriated Bernie delegates during the convention floor and still becomes a barrier for Hillary to win over Bernie supporters since.

“It’s true that too often, past trade deals have been sold to the American people with rosy scenarios that did not pan out. Those promises now ring hollow in many communities across Michigan and our country that have seen factories close and jobs disappear,” Hillary said. “So my message to every worker in Michigan and across America is this: I will stop any trade deal that kills jobs or holds down wages – including the Trans-Pacific Partnership. I oppose it now, I’ll oppose it after the election, and I’ll oppose it as President.”

Hillary added, “Mr. Trump may talk a big game on trade, but his approach is based on fear, not strength. Fear that we can’t compete with the rest of the world, even when the rules are fair. Fear that our country has no choice but to hide behind walls.”

One of the biggest eye-rolling remark came when Hillary referenced the summer Olympics to take a shot at Trump on his remarks regarding “America doesn’t win anymore” and his approach to free trade.

“Now Mr. Trump may talk a big game on trade, but his approach is based on fear, not strength. Fear that we can’t compete with the rest of the world, even when the rules are fair. Fear that our country has no choice but to hide behind walls,” Hillary said. “If Team USA was as fearful as Trump, Michael Phelps and Simone Biles would be cowering in the locker room, afraid to come out to compete. Instead, they’re winning gold medals. America isn’t afraid to compete.”