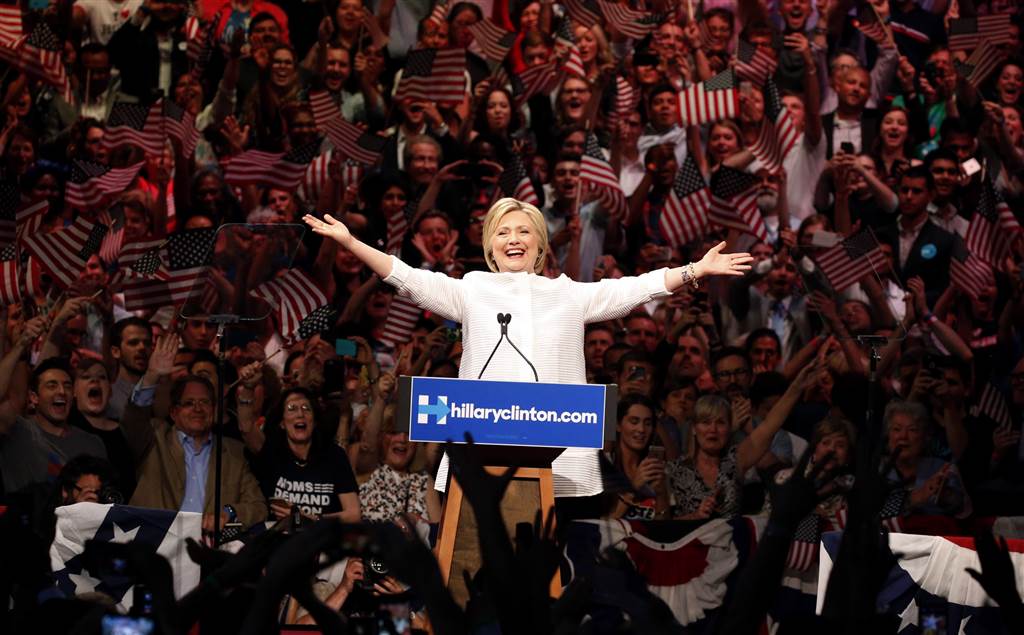 It’s considered to be a historic night for Hillary Clinton as she cemented her nomination status in the final contested primaries Tuesday night, becoming now the first woman in either party to claim this status.

“Thanks to you we’ve reached a milestone,” Hillary said, during a rally in Brooklyn, New York. “The first time in our nation’s history that a woman will be a major party’s nominee.”

Eight years ago on the very exact date, Hillary ended her first failed White House run to then Senator Barack Obama. The “glass ceiling” liner was used during her concession speech, declaring the “glass ceiling got about 18 million cracks,” but wasn’t able to be shattered. “Although we weren’t able to shatter that highest, hardest glass ceiling, thanks to you, its got about 18 million cracks in it and the light is shining through like never before,” Hillary said in Washington D.C., four days after winning the California primary in 2008.

Fast-forward to 2016, Hillary achieved what has been inevitable since re-launching her campaign over 15 months ago. “We are all standing under a glass ceiling right now,” Hillary said to raucous cheers from the crowd. “But don’t worry, we’re not smashing this one.”

Prior to her remarks, a 3-minute video montage called “History Made” was shown to her supporters, a tribute to woman political leaders of the suffrage movement. “In our country, it started right here in New York, a place called Seneca Falls in 1848 where a small but determined group of women and men came together with the idea that women deserved equal rights, and they set it forth in something called the declaration of sent and it was the first time in human history that that kind of declaration occurred,” Hillary said.

After sweeping the New Jersey primary with 64% of the votes, along with a narrow win in both New Mexico and South Dakota, Hillary declared final victory in the battle for the Democratic presidential nomination. California numbers were being tallied during the time of her remarks. The wins in three out of the six primary contests in the last Super Tuesday gave Hillary enough delegates needed to win on the first ballot at next month’s Democratic National Convention in Philadelphia.

On Monday night, the AP announced that Hillary had already earned enough delegates to clinch the nomination. According to the AP tally, Hillary had a total of 2,384 delegates of both pledged and super delegates, one more of the 2,383 delegates needed to become the presumptive Democratic nominee. Her rival, Vermont Senator Bernie Sanders had a total of 1,568 delegates with 1,521 of those being pledged and only 47 being super delegates. Bernie rejected the AP delegate tally, accusing the news agency of intentionally hurting his chances on the 11th hour. ”

All eyes were on California, the biggest delegate prize of night, to see whether Bernie would pull an upset. However, Hillary in sweeping New Jersey and gaining 73 out of the 126 delegates helped give her the push to secure the nomination.

During her emotional remarks, Hillary briefly praised Sanders for the hard fought campaign and for the issues he advanced. “I want to congratulate Senator Sanders for the extraordinary campaign he has run,” Hillary said, as the crowded cheered. “Senator Sanders, his campaign, and the vigorous debate that we’ve had about how to raise incomes, reduce inequality, increase upward mobility, have been very good for the democratic party and for America.”

Hillary invited Bernie’s supporters to join her campaign, believing that her rival would concede for “coming up short” on Tuesday. “I know it never feels good to put your heart into a cause or a candidate you believe in and to come up short. I know that feeling well,” Hillary said. “Whether you’re a Democrat, Republican, or Independent, I hope you will join us in just a few weeks, we will meet in Philadelphia which gave birth to our nation back in that hot summer of 1776.”

On Donald Trump, Hillary immediately wasted no time going after the GOP rival, attacking him for his controversial campaign rhetoric in regards to immigrants, Muslims, women and just recently the ethnicity of Judge Curiel. “Donald Trump is temperamentally unfit to be president,” Hillary declared. “He wants to win by stoking fear and rubbing salt into wounds and reminding us daily just how great he is.”

“When he says ‘Let’s Make America great again,’ that is code for ‘Let’s take America backwards,’” Hillary added. “To be great, we can’t be small. We have to be as big as the values that define America.”