The rally, with approximately 5,000 attendees, was aimed at reintroducing voters to Hillary after her failed bid in 2008.  Upcoming campaign stops in early voting states Iowa and New Hampshire will be small and well-planned, for Hillary supporters only.

A group of Republican protesters were also in attendance, holding ‘Hypocrisy’ signs featuring Hillary’s ‘H’ slogan, while staffers from the RNC handed out sunglasses with the word “Shady” to attendees.

Clinton stood on an H-shaped stage with an arrow through it, like her campaign logo.  Her speech was a dramatic re-do of her twitter announcement, was meant to overshadow the ten Republican candidates.  Her slogan, “In a place with absolutely no ceilings,” is in reference to her potentially becoming the nation’s first female president. 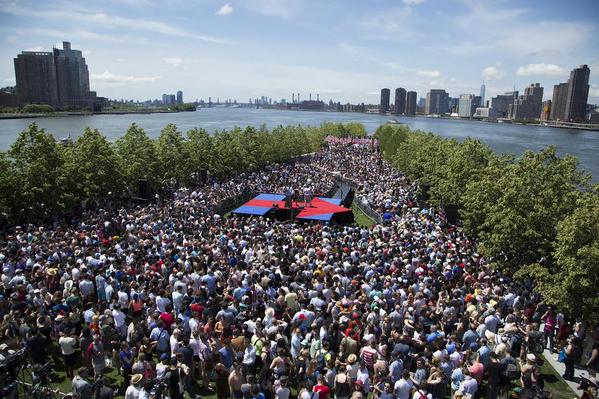 Imitating FDR “Four Freedoms” address, Hillary declared a “Four Fights For You” theme of building the economy, strengthening families, defending the country from foreign threats, and reforming the government. Presenting herself as a populist, Hillary gave a list of ideas she would push as president with few details as to how she would accomplish them: paid family leave, equal pay, cutting student debt, undoing Citizen United Supreme Court decision of super-PAC political spending by a constitutional amendment, and reproductive freedom for women.

Speaking a lengthy forty minutes (her first major speech since launching her campaign), Hillary touted being a “champion for all Americans” by providing economic policies as a relief for the middle class such as paid family leave, universal pre-school, and raising the minimum wages. On social issues, Hillary added that Republicans are “out of touch” with issues such as gay marriage and women’s reproductive rights.

Skeptics will note this is coming from a candidate whose headquarters is two train stops away from Wall Street and who raised millions from giant hedge funds for her campaign.  And many consider Hillary the poster child for ‘secret and unaccountable money in politics,’ as she has yet to answer questions about her foundation funds during her tenure as Secretary of State.

Many of Hillary’s talking points were personal, including the story of her mother being “abandoned and forced to work as a maid at the age of 14.” Hillary highlighted her career in public service as a ‘crusader focusing on fighting for children, woman, and workers,’ a fight that was instilled by her mother. “My mother taught me that everyone needs a chance and a champion,” Clinton said.

Hillary also took multiple jabs at Republicans, including Marco Rubio, who a day after Hillary’s twitter announcement said, “Now, there may be some new voices in the presidential Republican choir, but they’re all singing the same old song. A song called Yesterday.”

Hillary used age and gender as a presidential asset in her response:

“I may not be the youngest candidate in this race. But I will be the youngest woman president in the history of the United States. And the first grandmother as well. And one additional advantage – you won’t see my hair turn white in the White House. I’ve been coloring it for years!”

Clinton continued bashing Republican hopefuls, saying they are “promising lower taxes only for the wealthy and fewer rules for the biggest corporations” without regard to income inequality. She added Republicans want to “take away health insurance from millions of Americans” and “deport millions of immigrants who are in the country illegally.” On abortion, Hillary said Republicans “shame and blame” women instead of supporting their reproductive rights.  And on gay rights, Republicans “turn their backs on gay people who love each other.” She also claims Republicans “reject what it takes to build an inclusive economy when it takes an inclusive society to do so.” Clinton added, “What part of democracy are Republicans afraid of?”

The refocus of her relaunch emphasizes more of the progressive policies and ideas that President Obama embraced during his presidency, vowing to take on the immigration actions set forth by President Obama “if Congress fails to pass a comprehensive reform.”

The candidate, who once declared herself ‘dead broke’ when leaving the White House, claims to be a champion of the ‘little people’ and understands the struggle they go through daily.  But that didn’t prevent her from asking the ‘little people’ for donations as she wrapped up her speech saying, “I want you to join me in this effort, go to hillaryclinton.com.”

A tent, set up by her campaign staff, sold Hillary items including shirts, bags, and pins ranging in prices from $5-65.