Bronx, NY — A sea of officers gathered for the sixth time in less than three years to say their final goodbyes to NYPD Officer Miosotis Familia Tuesday morning in the Bronx.

Held in the World Changers Church, the former Loews Paradise Theater, over 4,000 mourners filled the old movie house. The packed funeral marked the 12th anniversary of Familia’s NYPD swearing-in. The service began at 10 a.m with a chorus singing “Amazing Grace,” with a video of flashing photos of Familia with her three children and family as a large photo situated of the officer smiling.

“That is why violence against the police and what we represent is a dishonor to civilized society,” O’Neill said. “This was an act of hate in this case against police officers, the very people who stepped forward and made a promise to protect you day and night.”

Thunderous applause and a standing ovation when O’Neill began sharply criticizing the lack of public outrage over the loss of an NYPD officer who was “targeted, ambushed, and assassinated.”

“There is anger and sorrow, but why is there no outrage? Because, Miosotis was wearing a uniform? Because it was her job? I simply do not accept that. Miosotis was targeted, ambushed and assassinated. She wasn’t given a chance to defend herself. That should matter to every single person that can hear my voice in New York City and beyond.”

He also called the perp who killed Familia a “coward.” 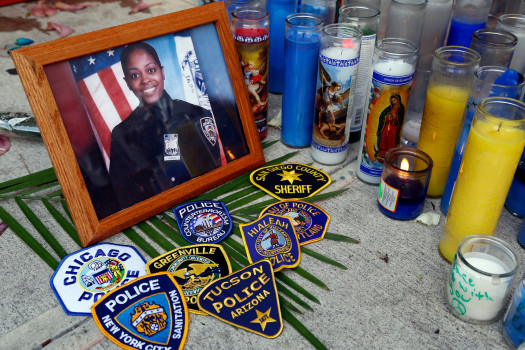 “On a night our nation celebrated its independence, the coward who committed this atrocity did not walk down the street after midnight and shoot just anybody. He shot a cop and what is certain, however, is that he hated the police,” O’Neill said. “All her killer could see was a uniform, even though Miosotis was so much more. He blamed the police for his own terrible choices in life.”

O’Neill added, “Some people say, that’s their job and that is what cops signed up for. Well, let me tell you something, not one of us ever agreed to be murdered in an act of indefensible hate and not one of us signed up to never return home to our loved ones.”

The perp who killed Familia, shot the officer in her head through the passenger side window, was killed moments after by responding officers. Familia was killed simply for just wearing an uniform

The slaying recalled the 2014 police targeted ambush of Officers Wenjian Liu and Rafeal Ramos, both who were shot in their patrol car in Brooklyn.

Familia is the first female officer to be killed in the line of duty since 9/11.

During the eulogy, O’Neill posthumously promoted Familia to the rank of first-grade detective, a tradition endowed within the NYPD after a cop is killed in the line of duty

After O’Neill remarks, Mayor Bill de Blasio spoke, but outside officers led a silent protest ,turning their backs or completely ignoring his speech that was overheard from the public address system. The anger stemmed from the mayor running to Germany to join protesters at the G20 summit, a day after family was executed. 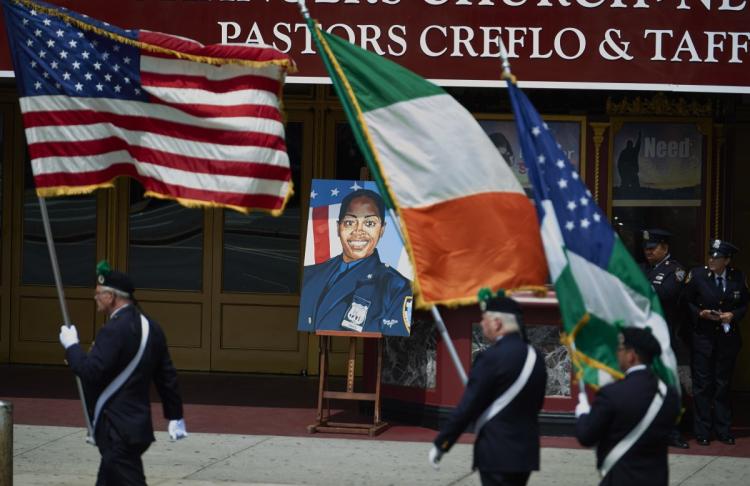 “The mayor is the compass for the City of New York,” Patrick Lynch, head of the Patrolmen’s Benevolent Association, said before the funeral. “And unfortunately, when a police officer got killed, his compass led him to Germany rather than here on the Grand Concourse. He should have been here with the family and he should have been there with us.”

SBA President said he was not surprised with officers’ public display of anger towards the mayor.

De Blasio spokesman Austin Finan dismissed the officers protest, calling it a “bogus controversy ginned up by the media and those looking to politicize Detective Familia’s death.”

To make a donation, go to Blue Lives Matter — NYC.

First Ladies of Fashion! — What Melania Trump and Brigitte Macron Wore in Paris