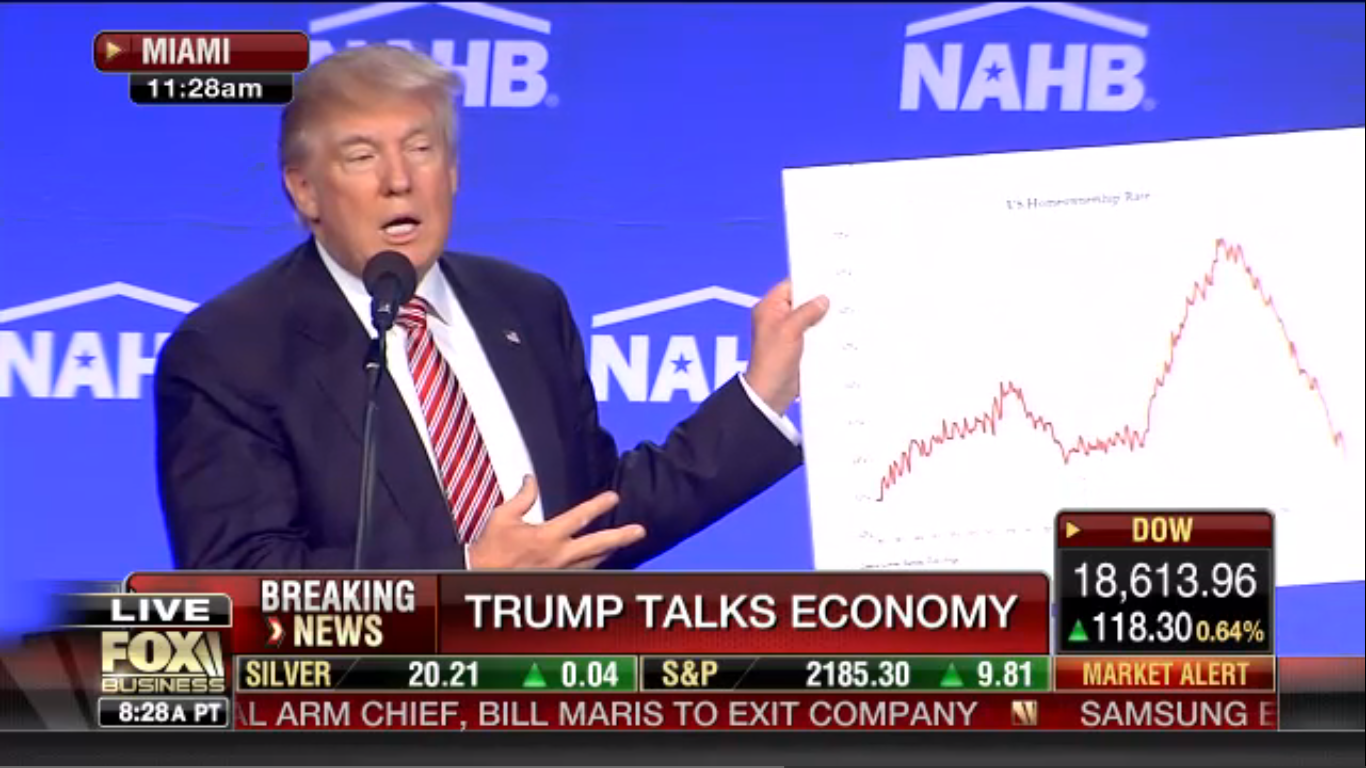 Speaking to the National Association of Home Builders Board of Directors Thursday morning, GOP candidate Donald Trump touched on many current issues he often addresses during his rallies but focused on one issue that is very close to his heart — homebuilding.

“Homebuilding is very close to my heart. That’s where I grew up,” Trump said as he highlighted his business background and praising his father, Fred Trump. “I grew up with a homebuilder — my father is a really good homebuilder and I used to sit at his knee with blocks, and watch my father or listen to my father negotiate on the phone with plumbers and sheet-rockers and electricians.

Trump added, “I learned tremendous things from a homebuilder and he would be very proud to see that we’re running for the presidency.”

Reiterating his economic plan from his Detroit speech given earlier this week, Trump zeroed in on issues related to the home building industry, while laying out his plan that consist of lowering taxes and reducing burdensome regulations.

“No one other than the energy industry is regulated more than the home building industry,” Trump said. “25 percent of the cost of a home is due to regulation and I think we should get that down to about two percent. It’s ridiculous.”

At one point during his 25 minute address, Trump showed the crowd of a 1,000 small business owners who gathered for the mid-year meeting in Miami, Florida a chart that showed the declining of homeownership, a rate that recently dropped to a 51-year low in which he blamed President Obama for the decline.

Trump went on to note how it has become harder for Americans to get mortgages due to the lack of mortgage credit and the regulation imposed on mortgage lending.

“It’s impossible for people to go get mortgages,” Trump said. “Unless you have a lot of money in the bank, you can’t borrow. It’s impossible with Dodd-Frank. I know people that can’t get houses.”

Trump added, “Overregulation is a big problem and it is costing our economy $2 trillion a year. You are a big beneficiary of overregulation. We will have a massive cut in regulations. We will eliminate all regulations that kills jobs. Hillary Clinton wants to tax and regulate our economy to death.”

On his Democratic rival, Trump repeated a claim that both Hillary and President Obama are co-founders of ISIS. This assertion that has claimed over the airwaves on mainstream media for speaking his mind was first heard Wednesday night at a rally in Florida.

“Our government isn’t giving us good protection. Our government has unleashed ISIS,” Trump said. “I call President Obama and Hillary Clinton the founders of ISIS. They’re the founders. ISIS will hand her the most valuable player award. Her only competition is Barack Obama.”

Hillary’s campaign hit back against this “false claim,” by releasing a statement while Trump was still addressing the homeowner group.

“It goes without saying that this is a false claim from a presidential candidate with an aversion to the truth and an unprecedented lack of knowledge. What’s remarkable about Trump’s comments is that once again, he’s echoing the talking points of Putin and our adversaries to attack American leaders and American interests, while failing to offer any serious plans to confront terrorism or make this country more secure,” Clinton’s senior policy adviser Jake Sullivan said in the statement.

Hillary took to Twitter in a series of tweets, defending President Obama, before she gave her rebuttal economic speech in Michigan.

It can be difficult to muster outrage as frequently as Donald Trump should cause it, but his smear against President Obama requires it.

No, Barack Obama is not the founder of ISIS.