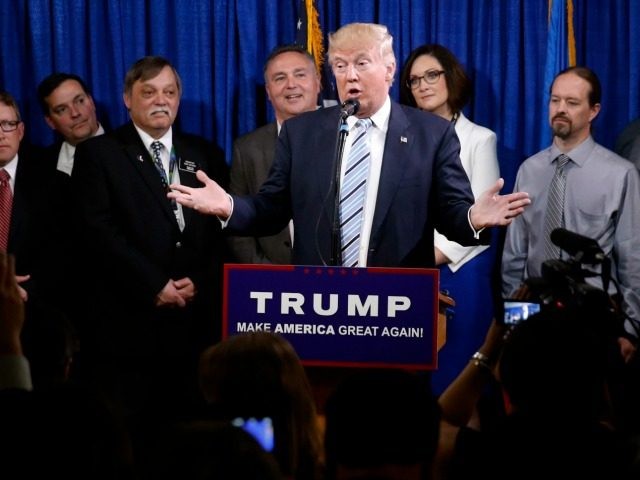 According to the AP report, Trump has crossed the threshold by one of 1,238 delegates he obtained by a “small number of the party’s unbounded delegates” who told the AP they would support him at the convention in Cleveland this July. Out of the 29 unbound Republican delegates, 15 of those unbound delegates came from North Dakota, 7 from Pennsylvania, 2 from West Virginia, 2 from Nevada and 1 each from Colorado, New Hampshire, and Oklahoma.

Among those who sealed the deal were Oklahoma GOP chairwoman Pam Pollard, and Colorado GOP chairman Steve House who spoke to the AP confirming their support.

“I think [Trump] has touched a part of our electorate that doesn’t like where our country is,” Pollard said. “I have no problem supporting Mr. Trump.”

“Leadership is leadership,” said House. “If he can surround himself with the political talent, I think he will be fine.”

Five states vote on June 7th with 303 delegates up for grabs in the final GOP primaries left before the convention. Among the five states is California, the largest prize with 173 delegates are at stake. The sole candidate left running on the GOP side, Trump will easily add more delegates to his total, avoiding a messy contested convention.

Speaking to reporters after securing the number to clinch the Republican nominee, Trump gloated that he secured the nomination before Democratic front-runner Hillary Clinton. “We were supposed to be going into July and here I am watching Hillary fight and she can’t even close the deal,” Trump said, during a press conference in North Dakota. “The folks behind me got us right over the top from North Dakota. We have had tremendous support from almost everybody.”

On debating Bernie Sanders, a prospect that originated Wednesday night on the show Jimmy Kimmel Live, Trump agreed to the idea only if money would be raised to be put up for charity. “I’d love to debate Bernie, he’s a dream,” Trump replied when asked about a possible bipartisan debate. “I said, and I said last night, I would love to debate him, but I want a lot of money to be put up for charity, women’s health issues. If we can raise $10 or 15m for charities.”

I am delighted that @realDonaldTrump has agreed to debate. Let’s do it in the biggest stadium possible.

The issue of the Keystone pipeline was asked before Trump gave his first major speech on energy issues at the annual Williston Basin Petroleum Conference. Trump told reporters he would approve the proposed pipeline, but added he wants a better deal only if the United States is given a significant piece of the profit.