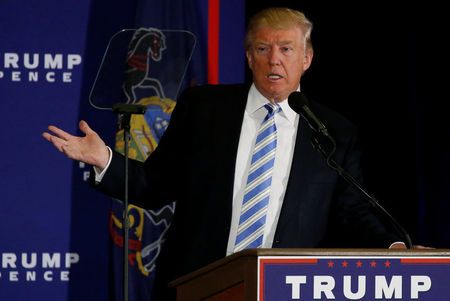 With just 17 days until voters ultimately decide the faith of who will be the next Commander-in-Chief, GOP nominee Donald Trump outlined an action agenda which he called it a “contract with the American voters” for the first 100 days in the White House.

“Change has to come from outside this broken system,” Trump said at Gettysburg, Pa, the site of President Abraham Lincoln gave the 1863 Civil War address. “I am asking the American people to rise above the noise and the clutter of our broken politics, and to embrace that great faith and optimism that has always been the central ingredients in the American character.”

In announcing his contract with the American voters, Trump’s 100-day action plan, he said “begins with restoring honesty, accountability, and change to Washington D.C.” Trump’s plan is broken down to 28 measures he plans to do to “restore prosperity to our country, secure our communities, and honesty to our government.”

The first six measure is broken down to “clean up the corruption and special interests collusion in Washington.”

Trump went on to state that on the same day pursing his administration “to clean up the corruption and special interest collusion in Washington D.C,” he would begin taking the following seven actions “to protect American workers.”

Adding on to his plan for day one, Trump plans to take five actions to restore security and the constitutional rule of law.

Regarding working with Congress on legislation measures, Trump vowed to introduce and fight for their passage within the first 100 days. Trump introduce 10 legislative acts that includes tax reliefs, school choice, repeal and replace Obamacare, end illegal immigration, and rebuild the military.

“On November 8th, Americans will be voting for this 100-day plan to restore prosperity to our economy, security to our communities, and honesty to our government,” Trump concluded. “This is my pledge to you.”

“And if we follow these steps, we will once more have a government of, by and for the people.”