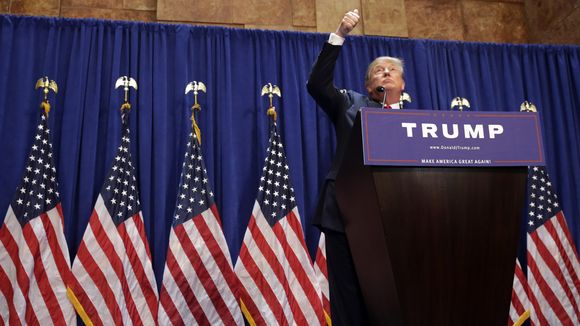 The real estate mogul and TV reality star launched his presidential campaign on Tuesday, finally ending more than years of flirtation of running for the White House

“So, ladies and gentlemen, I am officially running for president of the United States, and we are going to make our country great again,” Trump told the crowd in a lengthy 45-minute speech that hit on issues such as currency manipulation from China and job creation.

Trump made his announcement at the lavish Trump Tower on Fifth Avenue in New York, laying out a vision to match his incoming campaign slogan, “Make America Great Again.”

Trump’s wealth and results-driven success is business is part of what he hopes will be his appeal to voters as he looks to set himself apart from career politicians.

“I’ve watched the politicians, I’ve dealt with them all my life,” Trump said. “They will never make America great again. They don’t even have a chance.”

But it’s not clear whether Americans are ready yet to give Trump a chance to become that leader.

In recent polls, more than half of Republicans said they had a negative view of him — a tough spot to start a campaign.

He and his aides remain confident that voters will take Trump seriously after he has now made his intentions clear and announces he’s big for the White House.

“Sadly the American dream is dead,” Trump said at the end of his speech. “But if I get elected president I will bring it back bigger and better and stronger than ever before.”