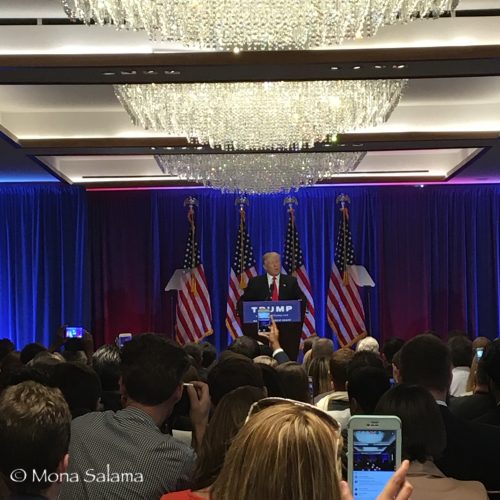 New York, NY. — In a counter attack speech, presumptive Republican nominee Donald Trump lambasted his Democratic rival Hillary Clinton as a “world-class liar,” and the “most corrupt person ever” running for president.

“Hillary Clinton and as you know is a world-class liar,” Trump said during his 45-minute speech given in Trump SoHo in New York City. “Just look at her pathetic email server statements or her phony landing in Bosnia where she said she was under attack, but the attack turned out to be young girls handing her flowers, a total self-serving lie.”

“Hillary Clinton may be the most corrupt person ever to seek the presidency,” Trump added.

Trump’s remarks focused primarily on Hillary’s tenure as Secretary of State, referencing books such as Clinton Cash, written by Breitbart News Editor Peter Schweizer that goes into details of how Hillary and her husband, former President Bill Clinton, received foreign payments in exchange for giving speeches.

“The book Clinton Cash, by Peter Schweitzer, documents how Bill and Hillary used the State Department to enrich their family at America’s expense,” Trump said. “She ran the State Department like her own personal hedge fund – doing favors for oppressive regimes, and many others, in exchange for cash.”

The speech was originally scheduled to be given last Monday in New Hampshire, but was put on hold due to the Orlando attacks that occurred just a day before. Instead, Trump gave a speech focusing on national security, reiterating his controversial proposals of temporarily banning Muslim immigrants to the U.S, while pointing out his rival support for more refugees from countries that pose a potential threat.

On Tuesday, Hillary delivered a speech on economics, but became a blistering attack speech on Trump’s business record to say is a threat to the U.S. economy. Trump shot back, defending his business record, while attacking Hillary from her personality to her policies issues to paint her as someone who enriches her self-interest at the expense of Americans.

“Yesterday, [Hillary] tried to attack me and my many businesses,” Trump stated. “I have always had a talent for building businesses and, importantly, creating jobs. That is a talent our country desperately needs.”

On Hillary’s foreign policy decision, Trump went into details of her time as Secretary of State unleashed “the Pandora’s box of radical Islam.”

“The Hillary Clinton foreign policy has cost America thousands of lives and trillions of dollars – and unleashed ISIS across the world,” Trump said, going into details of how Hillary destabilized nations in the Middle East from Libya, Iraq, Syria, and Egypt. “Her decisions spread death, destruction and terrorism everywhere she touched.”

Trump also reminded the crowd of the Benghazi attack under Hillary’s watch and the lies she spread to cover-up the tragedy. “Among the victims is our late Ambassador, Chris Stevens, who was left helpless to die as Hillary Clinton soundly slept in her bed when the phone rang at 3 o’clock in the morning,” Trump stated, receiving a standing ovation. “Ambassador Stevens and his staff in Libya made hundreds of requests for security and Hillary Clinton’s State Department refused them all. And to cover her tracks, Hillary lied about a video being the cause of his death.”

On trade deals, an issue that both Trump and Senator Bernie Sanders oppose and have used to target against Hillary, the presumptive Republican nominee attacked her for supporting deals that ships jobs overseas.

“I have visited the cities and towns across America and seen the devastation caused by the trade policies of Bill and Hillary Clinton,” Trump said. “Hillary Clinton supported Bill Clinton’s disastrous NAFTA and has also been the biggest promoter of the Trans-Pacific Partnership, which will ship millions more of our jobs overseas.”

Trump added, “If she is elected president, she will adopt the Trans-Pacific Partnership, and we will lose millions of jobs and our economic independence for good. She will do this, just as she has betrayed the American worker on trade at every single stage of her career and it will be even worse than the Clintons’ NAFTA deal.”

In condemning NAFTA and TPP, Trump made an appeal to Sanders supporters, asking them to join his movement over Hillary. A recent Bloomberg National poll found that nearly 50% of Bernie supporters’ would not support Hillary in the general election with 22% of those plan to vote for Trump.

“That’s why we’re asking Bernie Sanders’ voters to join our movement: so together we can fix the system for ALL Americans,” Trump said. “Importantly, this includes fixing all of our many disastrous trade deals.”

“Her campaign slogan is ‘I’m with her,’” Trump said. “You know what my response to that is? I’m with you — the American people.”