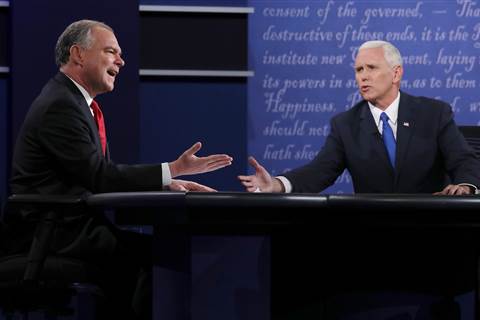 After Tuesday’s night only vice-presidential debate of the 2016 election that saw 90 minutes marred with interruptions and bitter accusations from Virginia Senator Tim Kaine, Indiana Governor Mike Pence emerged as the victor according to a CNN poll.

In the CNN/ORC flash poll conducted immediately after the Vice Presidential debate at Longwood University in Farmville Virginia, 48 percent of those who watched said Pence won, while 42 percent believe that Kaine won.

Only 14 percent believe that Pence underwhelmed performed than expected compared to 43 percent who believe Kaine did worse than expected.

The CNN/ORC poll interviewed 472 registered Virginia voters who watched the debate. According to CNN, the sample of the debate-watchers broke down to 41 percent registered Democrats and 30 percent were Republicans.