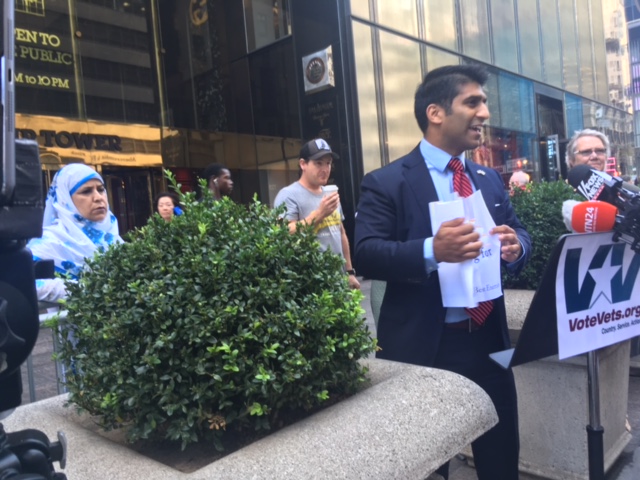 During the Republican presidential nominee Donald Trump speech on military buildup Wednesday afternoon in Philadelphia, a small group of Veterans and relatives of military members gathered outside of Trump Towers to protest his speech and express dismay over recent comments made by the real estate mogul.

“When Donald Trump opens his big, fat mouth every time, and he insults Americans and veterans, he puts the lives of our troops in danger, every single day,” former U.S. Army Captain Shah Chowdhury said at the press conference. “Trump does that and he is completely unfit to be commander-in-chief of this great nation.”

The group of Veterans known as VoteVets, a progressive political action committee that is aimed at helping veterans are devoting its resources and activities in favor of Democratic presidential candidate Hillary Clinton. According to OpenSecrets, a non-partisan research group, it found that VoteVets is one “of the highest spending liberal nonprofit active in federal elections,” spending $7.6 million from July 2014 through June 2015. (http://www.opensecrets.org/news/2016/05/fueled-by-unions-and-secret-donors-liberal-vets-group-spends-millions-boosting-democrats/ ) Since the Convention, the pro-Hillary super PAC has spent $3.4 million on ad buys focusing on painting Trump as a failed leader for the military.

Jon Soltz, the Chairman and co-founder of VoteVets organized the press conference to argue the Republican candidate remarks regarding the Khan family, Muslims and veterans disqualifies him to become president, adding the 88 retired general and admirals endorsing Trump “retired a long time ago and it’s a different military today.”

“More generals today wrote open letters supporting Hillary Clinton and overwhelmingly the senior military leaders  are against Trump,” Soltz said. “A lot of these generals have retired a long time ago and it’s a different military today. You cannot insult women in today’s military, you can’t insult Muslims. A lot of these generals are from a generation or two ago. Frankly their opinions and endorsement are less relevant than generals who recently commanded forces in Iraq and Afghanistan and those generals are supporting Hillary Clinton.”

On Trump’s proposal to suspend immigration from areas ties to terrorism in predominately Muslim areas, Chowdhury decried this issue, citing such statement empowers ISIS efforts and interferes with U.S. military efforts in helping to defeat ISIS in those areas.

“Any Vet who votes for Hillary, is a slap to those who made the Ultimate sacrifice, in service for our country,” Baldasaro said. “The Small amount of Vets there, don’t care that Hillary has blood on her hands from Benghazi and is protected by Attorney General, FBI & Obama. Hillary is not above the law and should be tried for Treason.Hillary has no respect for military or Police, shame on them.”

The Volatile Slugfest Of Main Street vs Wall Street Alongside Robinhood