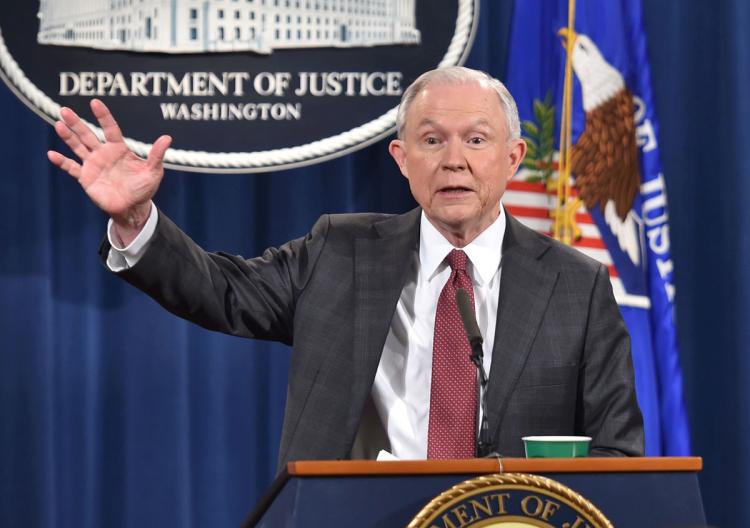 Attorney General Jeff Sessions on Thursday announced that he recuse himself from “any existing or future investigations of any matter relating in any way to the campaign for president of the United States.”

“I have decided to recuse myself from any existing or future investigations of any matters related in any way to the campaigns for President of the United States,” Sessions said.

Sessions, in a last minute press conference, comes just less than 24 hours after it was revealed he met with Russian Ambassador Sergey Kislyak twice last year. The Washington Post first reported that Sessions spoke with Kislyak in July during the Republican National Convention and in September at the Senator’s office.

Democrats since the revelations have called for Sessions to resign from AG, stating that he “lied” during the confirmation hearing that he never met with any Russian officials. House Minority Leader Nancy Pelosi has demanded Sessions to resign following his press conference, stating he lied to the “Senate and the American people.”

“Attorney General Sessions’ narrow recusal and his sorry attempt to explain away his perjury are totally inadequate,” Pelosi said in a statement. “Sessions’ lies to the Senate and to the American people make him unfit to serve as the chief law enforcement officer of our country. He must resign immediately.”

Senate Minority Leader, Chuck Schumer told reporters earlier Thursday that it “would be better for the country if he resigned.”

Most Republicans have defended Sessions, pointing out that meeting with Ambassadors is part of the job as a Senator. However, some Republicans, including House Oversight Chairman Jason Chaffertz call for Sessions to recuse himself from any probe into ties between the Trump campaign and Moscow.

House Speaker Paul Ryan said Sessions should only recuse himself if he “is the subject of the investigation.”

“If [Sessions] is the subject of an investigation, of course he would,” Ryan told reporters earlier Thursday. “But, if he is not, I don’t see any purpose or reason to doing this.”

Prior to the press conference, President Trump defended Sessions, telling reporters he doesn’t think Sessions shouldn’t recuse him, adding he has “total” confidence in his top law enforcement officer.

Sessions argued that he answered the question truthfully and the two meetings with the Russian ambassador was during his time as a member of the Senate Armed Services Committee, not as a Trump surrogate. He offered few details about his meeting with the Russian Ambassador during the press conference, stating they talked a “little about terrorism” and a “testy conversation” regarding the “subject of Ukraine.”

Sessions pushed back on allegations that he misled lawmakers during his confirmation hearing, defending his answer to Senator Franken was “honest and correct.”

“Let me be clear, I never had meetings with Russian operatives or Russian intermediaries about the Trump campaign,” Sessions said. “That is the question that Senator Franken asked me at the hearing and that is the question I responded to. My answer was honest and correct as I understood it at the time.”

Sessions added, “I didn’t respond by referring to the two meetings, one very brief after a speech and one with two of my senior staffers, professional staffers with the Russian ambassador in Washington, where no such things were discussed.”

According to Sessions, he will clarify to the Senate committee his statement in writing “for the record,” either today or tomorrow.

“I will write the Judiciary Committee soon, today or tomorrow, to explain this testimony for the record,” he said.

Sessions noted that his staff suggested that he recuse himself from anything involving the Trump campaign investigations.

“My staff recommended recusal,” Sessions stated. “They said that since I had involvement with the campaign, I should not be involved in any campaign investigation.”

In a written statement, Sessions made clear that “Acting Deputy Attorney General and U.S. Attorney for the Eastern District of Virginia Dana Boente shall act as and perform the functions of the Attorney General with respect to any matters from which I have recused myself to the extent they exist.”

Sessions recusing himself now means he will not be briefed on details of the investigations and will not be able to weigh in whether the DOJ should take the case if investigators decided to move forward with charges.

Trump Threatens to Use Constitutional Authority to Adjourn Congress